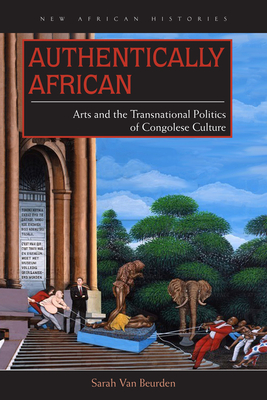 Together, the Royal Museum for Central Africa in Tervuren, Belgium, and the Institut des Musées Nationaux du Zaire (IMNZ) in the Congo have defined and marketed Congolese art and culture. In Authentically African, Sarah Van Beurden traces the relationship between the possession, definition, and display of art and the construction of cultural authenticity and political legitimacy from the late colonial until the postcolonial era. Her study of the interconnected histories of these two institutions is the first history of an art museum in Africa, and the only work of its kind in English.

Drawing on Flemish-language sources other scholars have been unable to access, Van Beurden illuminates the politics of museum collections, showing how the IMNZ became a showpiece in Mobutu’s effort to revive “authentic” African culture. She reconstructs debates between Belgian and Congolese museum professionals, revealing how the dynamics of decolonization played out in the fields of the museum and international heritage conservation. Finally, she casts light on the art market, showing how the traveling displays put on by the IMNZ helped intensify collectors’ interest and generate an international market for Congolese art.

The book contributes to the fields of history, art history, museum studies, and anthropology and challenges existing narratives of Congo’s decolonization. It tells a new history of decolonization as a struggle over cultural categories, the possession of cultural heritage, and the right to define and represent cultural identities.

“This masterful study of Belgian and Congolese collecting and exhibitions of African arts, and the murky heritage politics so implied, offers insights for understanding colonial and postcolonial histories of representation anywhere in the world.”—Allen F. Roberts, author of A Dance of Assassins: Performing Early Colonial Hegemony in the Congo

“Authentically African successfully shows how colonial tensions between politics and creativityleft their imprint on colonial as well as on postcolonial Congo… this book remains a necessaryintroduction to some key chapters in the rich and complex entrance of arts premiers into worldcultural histories.”— American Historical Review

“This is an important book that fills a gap in our knowledge about museums in this geographical area as well as our understanding of the role of political ideologies, a topic which has been well covered in South Africa, for example, but not as much by scholars in other parts of sub-Saharan Africa. … An impressive analysis.”—Museum Anthropology Review

“This well-informed book is the result of a careful inquiry carried out ‘on the spot’ in Congo, Belgium, and North America. … Authentically African successfully shows how colonial tensions between politics and creativity left their imprint on colonial as well as on postcolonial Congo. … This book remains a necessary introduction to some key chapters in the rich and complex entrance of arts premiers into world cultural histories.”—Jean-Luc Vellut, American Historical Review

“[An] impressive exploration of how and postcolonial powers in former Zaire utilized ‘cultural guardianship’ to justify their political legitimacy and to establish cultural and political economies nationally and internationally.”—African Studies Quarterly

Sarah Van Beurden is an associate professor of African studies at the Ohio State University. Her work has appeared in History and Anthropology and the Journal of African History, among others. She is also associated with the Max Planck Institute for the History of Science in Berlin.