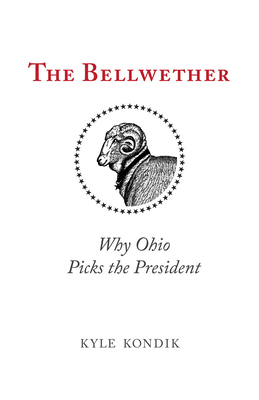 Why Ohio Picks the President

Since 1896, Ohio voters have failed to favor the next president only twice (in 1944 and 1960). Time after time, Ohio has found itself in the thick of the presidential race, and 2016 is shaping up to be no different. What about the Buckeye State makes it so special? In The Bellwether, Kyle Kondik, managing editor for the nonpartisan political forecasting newsletter Sabato’s Crystal Ball, blends data-driven research and historical documentation to explain Ohio’s remarkable record as a predictor of presidential results and why the state is essential to the 2016 election and beyond.

Part history, part journalism, this entertaining and astute guide proposes that Ohio has been the key state in the Electoral College for more than a century and examines what the idea of the swing state has come to mean. In discussing the evidence, Kondik uses the state’s oft-mentioned status as a microcosm of the nation as a case study to trace the evolution of the American electorate, and identifies which places in Ohio have the most influence on the statewide result. Finally, he delves into the answer to the question voting Ohioans consider every four years: Will their state remain a bellwether, or is their ability to pick the president on its way out?


Praise For The Bellwether: Why Ohio Picks the President…

“Do you care who is elected president? If so, you’d better read this book, because Ohio may well hand the keys to the White House to a lucky candidate this November, just as it has done many times. Kyle Kondik, a brilliant young analyst and rising star in the study of US politics, has made your task easy. This book is well written, richly illustrated, and bursting with gems about the Buckeye State—the center of our universe every four years.”—Larry J. Sabato, director, University of Virginia Center for Politics

Kyle Kondik is one of the nation’s top analysts of US House elections. He is the managing editor of Sabato’s Crystal Ball, a nonpartisan election forecasting newsletter published by the University of Virginia Center for Politics. He is the author of The Bellwether: Why Ohio Picks the President, also from Ohio University Press, and has edited and contributed to several recent books on US elections. As a frequently cited expert on American politics, Kondik has appeared on CNN, Fox News, MSNBC, PBS NewsHour, and Comedy Central’s The Daily Show, and his writing has appeared in the New York Times, Washington Post, Wall Street Journal, Politico Magazine, and other publications.