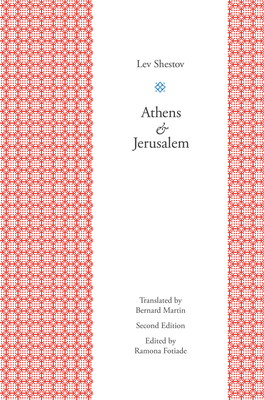 For more than two thousand years, philosophers and theologians have wrestled with the irreconcilable opposition between Greek rationality (Athens) and biblical revelation (Jerusalem). In Athens and Jersusalem, Lev Shestov—an inspiration for the French existentialists and the foremost interlocutor of Edmund Husserl, Martin Heidegger, and Martin Buber during the interwar years—makes the gripping confrontation between these symbolic poles of ancient wisdom his philosophical testament, an argumentative and stylistic tour de force.

Although the Russian-born Shestov is little known in the Anglophone world today, his writings influenced many twentieth-century European thinkers, such as Albert Camus, D. H. Lawrence, Thomas Mann, Czesław Miłosz, and Joseph Brodsky. Athens and Jerusalem is Shestov’s final, groundbreaking work on the philosophy of religion from an existential perspective. This new, annotated edition of Bernard Martin’s classic translation adds references to the cited works as well as glosses of passages from the original Greek, Latin, German, and French. Athens and Jerusalem is Shestov at his most profound and most eloquent and is the clearest expression of his thought that shaped the evolution of continental philosophy and European literature in the twentieth century.

Lev Shestov (1866–1938) elaborated a radical critique of rationalist knowledge and ethics from the point of view of individual human existence. Best known for his groundbreaking comparative studies of Tolstoy and Nietzsche, and of Dostoevsky and Nietzsche, Shestov defined his conception as the “philosophy of tragedy,” which opposed Greek speculative philosophy and biblical revelation.