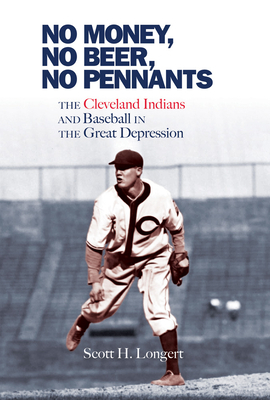 No Money, No Beer, No Pennants

The Cleveland Indians and Baseball in the Great Depression

The Cleveland Indians of 1928 were a far cry from the championship team of 1920. They had begun the decade as the best team in all of baseball, but over the following eight years, their owner died, the great Tris Speaker retired in the face of a looming scandal, and the franchise was in terrible shape. Seeing opportunity in the upheaval, Cleveland real estate mogul Alva Bradley purchased the ball club in 1927, infused it with cash, and filled its roster with star players such as Bob Feller, Earl Averill, and Hal Trosky. He aligned himself with civic leaders to push for a gigantic new stadium that—along with the team that played in it—would be the talk of the baseball world.

Then came the stock market crash of 1929. Municipal Stadium was built, despite the collapse of the industrial economy in Rust Belt cities, but the crowds did not follow. Always the shrewd businessman, Bradley had engineered a lease agreement with the city of Cleveland that included an out clause, and he exercised that option after the 1934 season, leaving the 80,000-seat, multimillion-dollar stadium without a tenant.

In No Money, No Beer, No Pennants, Scott H. Longert gives us a lively history of the ups and downs of a legendary team and its iconic players as they persevered through internal unrest and the turmoil of the Great Depression, pursuing a pennant that didn’t come until 1948. Illustrated with period photographs and filled with anecdotes of the great players, this book will delight fans of baseball and fans of Cleveland.


Praise For No Money, No Beer, No Pennants: The Cleveland Indians and Baseball in the Great Depression…

“Avid baseball fans, especially Cleveland fans, will enjoy No Money, No Beer, No Pennants.… A fine addition to any baseball fan’s bookshelf.”—Canadian Journal of History

“Though, as the title indicates, there aren’t too many happy events recorded in the book, it remains fascinating for the many stories and details Longert has pulled from his research.”—Akron Beacon-Journal

“Tribe fans will read it with great enthusiasm and baseball historians will reference it often, as Scott Longert brings much new, important information to the table. I particularly appreciated the backstories of the players and the conflicts that the team faced: old stadium versus new, radio broadcasts versus not, and day games versus night.”—Jon Hart, author of Man versus Ball: One Ordinary Guy and His Extraordinary Sports Adventures

“Much has been written about the great Indians players of the 1930s, but not so much on the team itself, and the building of the stadium is a great backdrop. Longert knows his stuff and goes to the right sources, and excels at capturing life in baseball at a particularly critical time for Clevelanders as well as the country.”—Marc Bona, features writer, Cleveland.com

“In so many baseball books, the authors report on too many details of too many games. Longert is more selective, sometimes only recounting key moments of pivotal games. I was sorry when this book ended.”—Book Reviews by Charles

Scott H. Longert is the author of Addie Joss: King of the Pitchers, The Best They Could Be: How the Cleveland Indians Became the Kings of Baseball, 1916–1920, and No Money, No Beer, No Pennants: The Cleveland Indians and Baseball in the Great Depression. He lives in Beachwood, Ohio, with his wife, Vicki, their handsome golden retriever, and two cool cats.