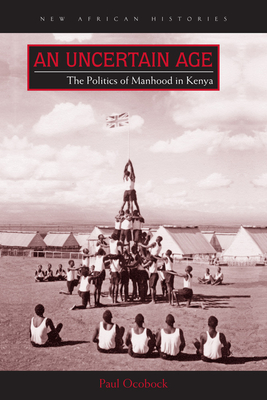 The Politics of Manhood in Kenya (New African Histories)

In twentieth-century Kenya, age and gender were powerful cultural and political forces that animated household and generational relationships. They also shaped East Africans’ contact with and influence on emergent colonial and global ideas about age and masculinity. Kenyan men and boys came of age achieving their manhood through changing rites of passage and access to new outlets such as town life, crime, anticolonial violence, and nationalism. And as they did, the colonial government appropriated masculinity and maturity as means of statecraft and control.

In An Uncertain Age, Paul Ocobock positions age and gender at the heart of everyday life and state building in Kenya. He excavates in unprecedented ways how the evolving concept of “youth” motivated and energized colonial power and the movements against it, exploring the masculinities boys and young men debated and performed as they crisscrossed the colony in search of wages or took the Mau Mau oath. Yet he also considers how British officials’ own ideas about masculinity shaped not only young African men’s ideas about manhood but the very nature of colonial rule.

An Uncertain Age joins a growing number of histories that have begun to break down monolithic male identities to push the historiographies of Kenya and empire into new territory.

Paul Ocobock is an assistant professor of history at the University of Notre Dame.


Praise For An Uncertain Age: The Politics of Manhood in Kenya (New African Histories)…

“Provocative and meticulously researched, Ocobock’s book demonstrates the importance of age and masculinity in Kenyan history. Readers will appreciate the elegant prose and arresting detail of this rigorous narrative history. Ocobock is unquestionably a historian and writer of first rank.”—Kenda Mutongi, author of Matatu: A History of Popular Transportation in Nairobi

“In Ocobock’s work, intriguing tales about male initiation and other coming-of-age practices show how African youth and elders struggled with colonial officials, missionaries, settlers, and nationalist leaders over the meanings of manhood. His nuanced analysis enriches and expands the history of masculinities.”—Stephan F. Miescher, author of Making Men in Ghana

“In demonstrating the centrality of concerns over age and gender, Ocobock offers a brilliant means of reconceiving Kenyan history beyond the more usual focus on ethnicity. Linking the processes of growing up and state making, he deftly shows how gendered notions of maturity have shaped Kenya’s politics. This superb book will find a wide and appreciative audience.”—Philippa Levine, author of Prostitution, Race, and Politics: Policing Venereal Disease in the British Empire

“With a sure command of the literature, Ocobock argues for the increased importance of gender and generation for historical research.…The core of the book, based on archival material and in-depth interviews, contrasts the colonial era ‘elder state’ to the contemporary postcolonial situation. Although these chapters are informative and detailed, the introductory chapter alone is worth the price of admission’…Summing up: Highly recommended.”—Choice
or
Buy Here
Copyright © 2020 American Booksellers Association