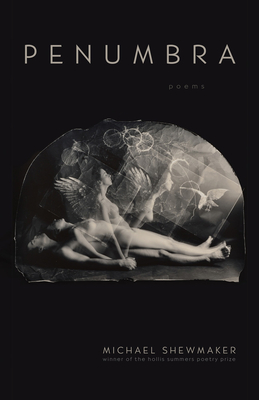 Penumbra—Michael Shewmaker’s debut collection—explores the half-shadows of a world torn between faith and doubt. From intricate descriptions of the rooms in a dollhouse, to the stark depiction of a chapel made of bones, from pre-elegies for a ghostly father, to his compelling treatment of his obsessed, human characters (a pastor, a tattoo artist, a sleepwalker, to name only a few), these are poems that wrestle with what it means to believe in something beyond one’s own mortality. Learned and formally adept, these poems consist of equal parts praise and despair. They announce Shewmaker as an important new voice in American poetry.

“More than any young poet I have read in quite a while, Shewmaker’s artistry reminds me of the exacting felicities of the Donald Justice of The Summer Anniversaries and the Richard Wilbur of Advice to a Prophet. Shewmaker writes poems for the ear and for the heart. Again and again in Penumbra, he hits on that fortunate collaboration of the natural idiom and phrasing that is striking for both its formal grace and originality.”—Rodney Jones, 2015 Hollis Summers Poetry Prize judge

“With his debut collection, Michael Shewmaker joins the ranks of poets such as Erica Dawson, Richie Hofmann, Melissa Range, and Caki Wilkinson who are writing rigorous formal poems that speak in twenty-first-century voices. …Shewmaker’s best poems… balance on the thin, slippery bar of form, perched between spiritual concerns and engagement with the world of the five senses, between, as he writes, ‘the martyrs and the marbled ground.’” —Pleiades

“This is the best first book I’ve read in ages. Suddenly among us is a poet whose keen eye takes in the world—its shimmering details, its haunted characters, its lingering ghosts. With his wizardry of form and pitch-perfect voice, he writes with a warmth that can startle and an authority that can thrill. Michael Shewmaker is the one to keep your eye on.”—J. D. McClatchy

“At first sight, these are poems lighted by curiosity and a deft music that brings the world to our door: A curlew at sunset. Two men in a bar. An unsettling dream. But what gives this collection its real power is the shadow of something beyond that world: of a struggle to find a shape that is also a meaning. It is this reach, this rare ambition, which makes this debut collection both memorable and compelling.”—Eavan Boland, author of A Woman Without a Country