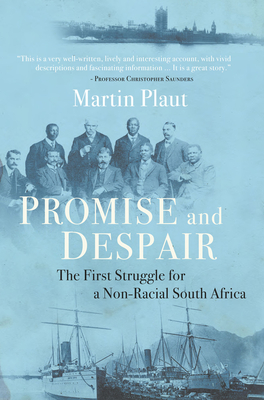 The struggle for freedom in South Africa goes back a long way. In 1909, a remarkable interracial delegation of South Africans traveled to London to lobby for a non-racialized constitution and franchise for all. Among their allies was Mahatma Gandhi, who later encapsulated lessons from the experience in his most important book, Hind Swaraj. Though the mission failed, the London debates were critical to the formation of the African National Congress in 1912.

With impeccable storytelling and rich character depictions, Martin Plaut describes the early quest for black franchise and the seeds it planted for a new South Africa. While most people believe that black South Africans obtained the vote in 1994, men of all races voted in the Cape Colony for almost a century, sometimes deciding election outcomes. The London mission was part of a long history of nonwhite political agency.

Taking as its centerpiece the 1909 delegation, Promise and Despair covers the twelve years between the South African War and the First World War, during which the major forces that would shape twentieth-century South Africa were forged. Plaut reveals new details of the close collaboration between Gandhi and the ANC leadership during the Indian-South African community’s struggle for their rights, the influence of the American South on South African racial practices, and the workings of the Imperial system.


Praise For Promise and Despair: The First Struggle for a Non-Racial South Africa…

“With violent protests in Pretoria and Cape Town against top-down imposition by the ANC of unwanted election candidates, this superb new book … could not be more timely.… The characters, backgrounds and qualities of the main actors from that time come to life with an almost contemporary vividness, indicating the deep structure of South Africa’s polity and the enduring relevance of this seminal period in its history.”—Mail and Guardian (South Africa)