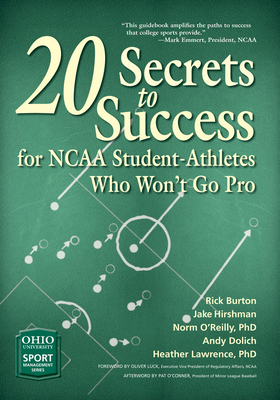 The vast majority of student-athletes dreaming of athletic stardom won’t make it to the pros. Yet, the discipline and skills they’ve developed while balancing a sport and academics make them ideally suited for satisfying careers elsewhere.

In 20 Secrets to Success for NCAA Student-Athletes Who Won’t Go Pro, the authors draw on personal experience, interviews, expert opinion, and industry data to provide a game plan for student-athletes through key transitions at each stage of their careers, from high school through college and beyond.

Modeled on Stephen Covey’s The 7 Habits of Highly Effective People, this book provides a much-needed strategy for achieving career success. Readable and concise, it will be a valuable tool for students, parents, and sports administrators.

Rick Burton is the David B. Falk Endowed Professor of Sport Management at Syracuse University. He served as the chief marketing officer for the U.S. Olympic Committee for the Beijing 2008 Summer Olympics. He was previously commissioner of the Australian National Basketball League. He also operates the Burton Marketing Group, which has worked with the NFL, NHL, NBL, and others.

Jake Hirshman is a former collegiate baseball player who earned a masters degree in sports management and one in sports sciences and recreation, both from Ohio University. He recently has worked for the Seattle Mariners and Arizona Diamondbacks, and currently works for the Arizona fall league at Major League Baseball.

Norm O’Reilly, PhD, is a leading scholar in the business of sports. He holds the Richard P. and Joan S. Fox Professor of Business and is chair of the Department of Sports Administration at Ohio University’s College of Business. Dr. O’Reilly received the Career Achievement Award by the American Marketing Association’s Sport Marketing Special Interest Group. He is a lifetime research fellow of the North American Society for Sport Management.

Andy Dolich brings several decades of executive experience in the sports industry, including positions in the NFL, MLB, NBA and NHL. As team COO, Dolich was responsible for the day-to-day business operations of the San Francisco 49ers. Dolich runs a sports business consulting business in the San Francisco Bay area. He is the Director of Career Development for the University of San Francisco’s collegiate athletics masters program.

Heather Lawrence, PhD, is Associate Professor of Sports Administration and Robert H. Freeman Professor of Business in the College of Business at Ohio University. Previously, Dr. Lawrence worked in administrative positions within intercollegiate athletics at Southeastern Louisiana University and the University of Florida. Her sport industry responsibilities have included working in NCAA compliance, facility management, general administration, event operations, and as a sport supervisor.

“This guidebook amplifies the paths to success that college sports provide. The broad perspectives shared throughout the book demonstrate a perfect understanding of how important it is for student-athletes to give their talents to their sport and their focus to academics.”—Mark Emmert, President, NCAA

“All student athletes and their mentors should read this book. It brings into focus the challenges and the opportunities inherent in being a collegiate athlete. Most importantly, it outlines a framework for how to successfully navigate the landscape and develop an outstanding life plan.”—Deborah A. Yow, Director of Athletics, North Carolina State University

“This book reinforces what those of us who work in the collegiate athletics industry understand and should be a required reading for everyone pursuing NCAA scholarships and all NCAA student-athletes.”—Stan Wilcox, Vice President & Director of Athletics, Florida State University

“The authors provide terrific insight and practical advice on how to develop a road map for that ‘next’ phase in your life and better prepare you for long-term success. I recommend this for anyone invested in the lives of student-athletes, but especially for aspiring or current student-athletes … it’s never too late to start thinking about what’s next.”—Amy Huchthausen, Commissioner, America East Conference

“Although this book is for college athletes who won’t go pro, even pro athletes will find, at the end of their professional sports career (which often happens very quickly), that they can benefit from the practical tools and advice in this boo
or
Buy Here
Copyright © 2020 American Booksellers Association