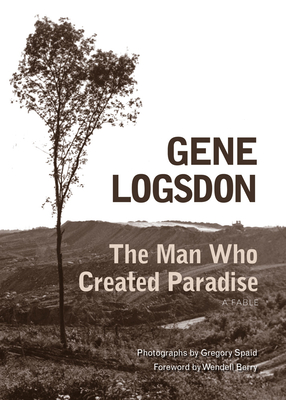 The Man Who Created Paradise

Gene Logsdon’s The Man Who Created Paradise is a message of hope at a time when the very concept of earth stewardship is under attack. The fable, inspired by a true story, tells how Wally Spero looked at one of the bleakest places in America—a raw and barren strip-mined landscape—and saw in it his escape from the drudgery of his factory job. He bought an old bulldozer and used the machine to carve patiently, acre by acre, a beautiful little farm out of a seemingly worthless wasteland.

Wally’s story is a charming distillation of the themes that the late, beloved Gene Logsdon returned to again and again in his many books and hundreds of articles. Environmental restoration is the task of our time. The work of healing our land begins in our own backyards and farms, in our neighborhoods and our regions. Humans can turn the earth into a veritable paradise—if they really want to.

Noted photographer Gregory Spaid retraced the trail that Logsdon traveled when he was inspired to write The Man Who Created Paradise. His photographs evoke the same yearning for wholeness, for ties to land and community, that infuses the fable’s poetic prose.


Praise For The Man Who Created Paradise: A Fable…

“If you’re feeling despairing, this book is the tonic. This slim volume should be read aloud at kitchen tables and over the radio until it becomes a national legend—a legend we might then try to live up to.”—Bill McKibben

“This big-hearted parable about a land and people restored is sure to lift the spirits of anyone who cares about the blooming earth.”—Scott Russell Sanders

“This book is a work of social, ecological, and moral imagination—a reminder that we do not live in the only or the best possible world.”—Jedediah Purdy

“This, then, is a book of two visions: one of disease, one of health. Or to put it another way, Gene Logsdon has had the generosity and the courage to allow a vision of Hell to call forth in himself its natural opposite.”—Wendell Berry

“The Man Who Created Paradise is an art object of a book, a perfect birthday gift, a fable to read over and over because it identifies the rural psyche gone awry and made right again. Much like Wes Jackson's Altars of Unhewn Stone, it cries out for greater circulation…”—Acres USA

“A metal grinder at a foundry possessing the pre-requisites for an agrarian mind becomes an artist on an exploited landscape and brings it back to become a working farm. Well, there is hope.” — Wes Jackson

Gene Logsdon (1931–2016) was the author of more than thirty books and countless magazine articles on agrarian issues including small-scale farming and sustainable living. He is the author of four Swallow Press/Ohio University Press books: All Flesh Is Grass: The Pleasures and Promises of Pasture Farming, The Man Who Created Paradise: A Fable, Wyeth People, and The Last of the Husbandmen: A Novel of Farming Life.