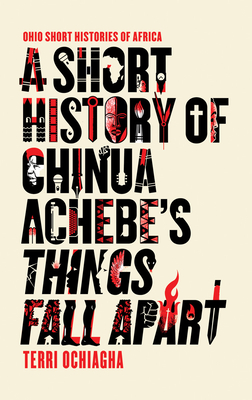 The publication of Chinua Achebe’s Things Fall Apart (1958) is heralded as the inaugural moment of modern African fiction, and the book remains the most widely read African novel of all time. Translated into dozens of languages, it has sold more than twelve million copies and has become a canonical reading in schools the world over. While Things Fall Apart is neither the first African novel to be published in the West nor necessarily the most critically valued, its iconic status has surpassed even that of its author.

Until now—in the sixtieth anniversary year of its publication—there has not been an updated history that moves beyond the book’s commonly discussed contexts and themes. In the accessible and concise A Short History of Chinua Achebe’s Things Fall Apart, Terri Ochiagha provides that history, asking new questions and bringing to wider attention unfamiliar but crucial elements of the Things Fall Apart story. These include new insights into questions of canonicity and into literary, historiographical, and precolonial aesthetic influences. She also assesses adaptations and appropriations not just in films but in theater, hip-hop, and popular literary genres such as Onitsha Market Literature.

“Ochiagha decries the tokenist approach adopted by some Western academics who overlook the novel’s sophistication and entreats us to appreciate its subtle complexity.”—Times Literary Supplement

“Ochiagha’s work is a seminal piece presenting fresh and illuminating information to literary scholars and Africanists alike, an excellent and laudable update to a timeless classic!”—Ignatius Chukwumah, African Studies Review

Dr. Terri Ochiagha is a lecturer in world literatures in English in Royal Holloway, University of London. Her first book, Achebe and Friends at Umuahia: The Making of a Literary Elite, won the African Studies Association UK’s Fage and Oliver Prize in 2016.