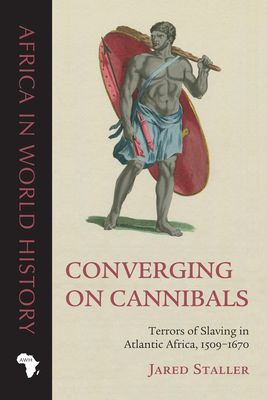 Terrors of Slaving in Atlantic Africa, 1509–1670 (Africa in World History)

In Converging on Cannibals, Jared Staller demonstrates that one of the most terrifying discourses used during the era of transatlantic slaving—cannibalism—was coproduced by Europeans and Africans. When these people from vastly different cultures first came into contact, they shared a fear of potential cannibals. Some Africans and European slavers allowed these rumors of themselves as man-eaters to stand unchallenged. Using the visual and verbal idioms of cannibalism, people like the Imbangala of Angola rose to power in a brutal world by embodying terror itself.

Beginning in the Kongo in the 1500s, Staller weaves a nuanced narrative of people who chose to live and behave as “jaga,” alleged cannibals and terrorists who lived by raiding and enslaving others, culminating in the violent political machinations of Queen Njinga as she took on the mantle of “Jaga” to establish her power. Ultimately, Staller tells the story of Africans who confronted worlds unknown as cannibals, how they used the concept to order the world around them, and how they were themselves brought to order by a world of commercial slaving that was equally cannibalistic in the human lives it consumed.


Praise For Converging on Cannibals: Terrors of Slaving in Atlantic Africa, 1509–1670 (Africa in World History)…

“In a major contribution to historical methodology, Staller revisits sixteenth- and seventeenth-century accounts for what they can reveal, despite their biases and eurocentrism, about Africans’ understandings of and interactions with Portuguese invasion and the associated violence. Cannibalism rumors are taken seriously in this analysis as a way to unpack traumatic episodes associated with the expansion of the transatlantic slave trade.”—Mariana Candido, author of An African Slaving Port and the Atlantic World: Benguela and Its Hinterland

“This is the best scholarship to date on the history and mythology of cannibalism in west central Africa…Moreover, the simplicity of Staller’s prose belies the sophistication of his conceptual framework, making his work an important teaching tool for both the undergraduate and graduate level.”—Christina Mobley, University of Virginia

“A welcome addition to the literature. Not only does [Staller] dispel myths about the Jaga, he demonstrates that Europeans and Africans played a key role in creating them.”—International Journal of African Historical Studies, Vol. 53 No. 2 (2020)

Jared Staller teaches world history at St. Francis Episcopal School of Houston, Texas. He earned his PhD from the University of Virginia and taught African and world history at Rice University. His research has appeared in History in Africa, Research in African Literatures, and elsewhere.