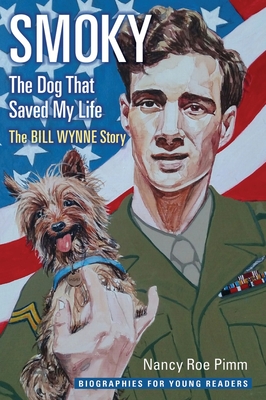 Smoky, the Dog That Saved My Life

World War II soldier Bill Wynne met Smoky while serving in New Guinea, where the dog, who was smaller than Wynne’s army boot, was found trying to scratch her way out of a foxhole. After he adopted her, she served as the squadron mascot and is credited as being the first therapy dog for the emotional support she provided the soldiers. When they weren’t fighting, Bill taught Smoky hundreds of tricks to entertain the troops. Smoky became a war hero herself at an airstrip in Luzon, the Philippines, where she helped save forty airplanes and hundreds of soldiers from imminent attack.

After the war, Bill worked as a Hollywood animal trainer and then returned to his hometown of Cleveland, Ohio. He and Smoky continued to perform their act, even getting their own TV show, How to Train Your Dog with Bill Wynne and Smoky.

Nancy Roe Pimm presents Bill and Smoky’s story to middle-grade readers in delightful prose coupled with rich archival illustrations. Children will love learning about World War II from an unusual perspective, witnessing the power of the bond between a soldier and his dog, and seeing how that bond continued through the exciting years following the war.


Praise For Smoky, the Dog That Saved My Life: The Bill Wynne Story (Biographies for Young Readers)…

“Nancy Pimm does justice to the inspiring story of World War II soldier Bill Wynne and Smoky, his hero best friend. This is a must-read for any dog lover.”—Charles Shuck, Iraq War veteran and handler of 2012 American Humane Hero Dog Gabe

“In war-torn New Guinea, a young soldier and a scrawny stray dog joined forces. He went on to become a distinguished photographer and photojournalist, and his companion a war hero and pioneering therapy dog. Nancy Roe Pimm provides a fresh take on the fascinating story of Bill Wynne and Smoky for a new generation of readers.”—Robert S. Arrighi, archivist (ATS) at NASA Glenn Research Center

“For all the horror of World War II, there was also hope in Bill Wynne and Smoky. They found each other in the midst of war and forged a heartwarming and endearing bond that lasted a lifetime. It doesn’t get any better.”—Brian Albrecht, military affairs reporter, the Plain Dealer