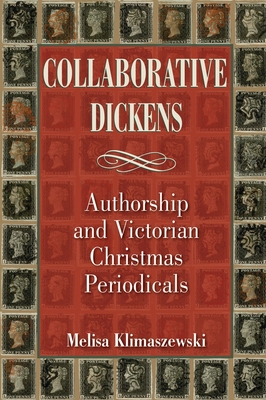 From 1850 to 1867, Charles Dickens produced special issues (called “numbers”) of his journals Household Words and All the Year Round, which were released shortly before Christmas each year. In Collaborative Dickens, Melisa Klimaszewski undertakes the first comprehensive study of these Christmas numbers. She argues for a revised understanding of Dickens as an editor who, rather than ceaselessly bullying his contributors, sometimes accommodated contrary views and depended upon multivocal narratives for his own success.

Klimaszewski uncovers connections among and between the stories in each Christmas collection. She thus reveals ongoing conversations between the works of Dickens and his collaborators on topics important to the Victorians, including race, empire, supernatural hauntings, marriage, disability, and criminality. Stories from Wilkie Collins, Elizabeth Gaskell, and understudied women writers such as Amelia B. Edwards and Adelaide Anne Procter interact provocatively with Dickens’s writing. By restoring links between stories from as many as nine different writers in a given year, Klimaszewski demonstrates that a respect for the Christmas numbers’ plural authorship and intertextuality results in a new view of the complexities of collaboration in the Victorian periodical press and a new appreciation for some of the most popular texts Dickens published.

“This is a mature and original piece of scholarship that adds substantially to the critical understanding of Dickens and is the first comprehensive overview of his Christmas numbers. Considering each number as its own aesthetic unit, Klimaszewski convincingly argues for a different and more flexible understanding of authorship (and of “Dickens”) as polyvocal, often contradictory, and conversational in nature. Her discussion of Dickens’s collaborations with Wilkie Collins is particularly strong.”—John O. Jordan, editor of The Cambridge Companion to Charles Dickens and director, the Dickens Project

“Collaborative Dickens is a new and distinct contribution that will be of substantial interest to Dickens scholars, to those working more broadly on Victorian studies, to researchers focused on the periodical press, and to scholars examining models of collaborative authorship.”—Iain Crawford, past president, the Dickens Society

Melisa Klimaszewski is Professor of English and the director of the Women’s and Gender Studies Program at Drake University. She has edited several of Dickens’s collaborative works, authored a critical bibliography of scholarship on Dickens for Oxford University Press’s Oxford Bibliographies in British and Irish Literature, and published short biographies of Charles Dickens and Wilkie Collins.