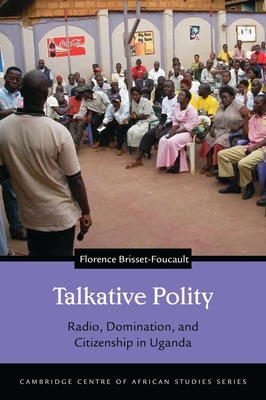 For the first decade of the twenty-first century, every weekend, people throughout Uganda converged to participate in ebimeeza, open debates that invited common citizens to share their political and social views. These debates, also called “People’s Parliaments,” were broadcast live on private radio stations until the government banned them in 2009. In Talkative Polity, Florence Brisset-Foucault offers the first major study of ebimeeza, which complicate our understandings of political speech in restrictive contexts and force us to move away from the simplistic binary of an authoritarian state and a liberal civil society.

Brisset-Foucault conducted fieldwork from 2005 to 2013, primarily in Kampala, interviewing some 150 orators, spectators, politicians, state officials, journalists, and NGO staff. The resulting ethnography invigorates the study of political domination and documents a short-lived but highly original sphere of political expression. Brisset-Foucault thus does justice to the richness and depth of Uganda’s complex political and radio culture as well as to the story of ambitious young people who didn’t want to behave the way the state expected them to. Positioned at the intersection of media studies and political science, Talkative Polity will help us all rethink the way in which public life works.

“This is an exciting, path-finding study of the ambiguous rules under which Ugandans explore, from above and below, the politically permissible in their ‘no-party’ state. Social discipline constrains freedom of speech as much as state surveillance. The choreography of publicly compliant criticism, superbly observed, advertises a polite political class in the making, not vulgar dissent.”—John Lonsdale, University of Cambridge

“Talkative Polity’s depiction of political practice is intricate, thoughtful, and complex. Brisset-Foucault goes deep into the messy verbal jousts and opinionated debates of the ‘people’s parliaments,’ ultimately reclaiming political discourse as something that is done by Ugandans, for Ugandans, and about Uganda.”—L. Carol Summers, author of Colonial Lessons: Africans’ Education in Southern Rhodesia, 1918–1935

Florence Brisset-Foucault is a lecturer in political science at the University of Paris 1 Panthéon-Sorbonne and a member of the Institut des mondes africains in Paris. Previously, she was a junior research fellow at Trinity College, a member of the Centre of African Studies, and a research associate at the Centre of Governance and Human Rights at the University of Cambridge.