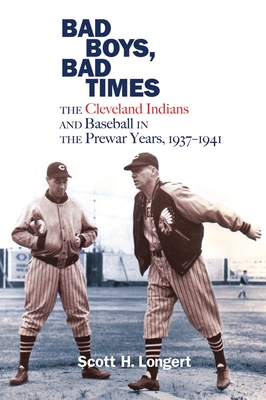 The Cleveland Indians and Baseball in the Prewar Years, 1937–1941

In 1937, the Great Depression was still lingering, but at baseball parks across the country there was a sense of optimism. Major League attendance was on a sharp rise. Tickets to an Indians game at League Park on Lexington and East 66th were $1.60 for box seats, $1.35 for reserve seats, and $.55 for the bleachers. Cleveland fans were particularly upbeat—Bob Feller, the teenage phenomenon, was a farm boy with a blistering fast ball. Night games were an exciting development. Better days were ahead.

But there were mounting issues facing the Indians. For one thing, it was rumored that the team had illegally signed Feller. Baseball Commissioner Judge Kenesaw Mountain Landis was looking into that matter and one other. Issues with an alcoholic catcher, dugout fights, bats thrown into stands, injuries, and a player revolt kept things lively.


Praise For Bad Boys, Bad Times: The Cleveland Indians and Baseball in the Prewar Years, 1937–1941…

“Scott Longert continues his deep dive into the history of the Cleveland Indians, picking up where No Money, No Beer, No Pennants left off. This particular era—which included the signing and development of Bob Feller as the greatest pitcher in team history—has never received the dedicated treatment that Longert gives it here. This book includes much for fans of the Indians, of baseball, and of Cleveland history to love.”—Jeremy Feador, Cleveland Indians team historian

"He might not have started out this way, but Scott Longert has quietly become a pre-eminent baseball historian. He is slowly chronicling the Cleveland Indians' rich past through excellent scholarship, bringing to life former eras and the players who helped shape the franchise.“—Marc Bona, The Plain Dealer

Praise for No Money, No Beer, No Pennants
“Tribe fans will read it with great enthusiasm and baseball historians will reference it often, as Scott Longert brings much new, important information to the table.”—Jon Hart, author of Man versus Ball: One Ordinary Guy and His Extraordinary Sports Adventures

Praise for No Money, No Beer, No Pennants
“Much has been written about the great Indians players of the 1930s, but not so much on the team itself…. Longert knows his stuff and goes to the right sources, and excels at capturing life in baseball at a particularly critical time for Clevelanders as well as the country.”—Marc Bona, features writer, Cleveland.com

Scott H. Longert is the author of six books (including four Ohio University Press titles) on Cleveland baseball history from the post–Civil War era through the middle of the twentieth century. He has an MA in American history from Cleveland State University and has appeared on numerous broadcast media shows and baseball documentaries. Longert is a lifetime resident of Cleveland, where he lives with his wife, Vicki, and several dogs and cats.