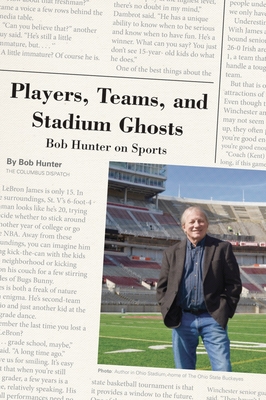 In Players, Teams, and Stadium Ghosts, sportswriter Bob Hunter has assembled a Hall of Fame collection of his best writing from the Columbus Dispatch. Fans will encounter some of the biggest names in sports and relive great moments from games played by amateurs and pros. They’ll encounter forgotten players and teams that struggled.

Hunter shows us LeBron James when he was a 15-year-old high school freshman, already capturing the world’s attention; 20-year-old Derek Jeter’s meteoric rise through the minors, including the Columbus Clippers; a strange encounter with Pete Rose hustling frozen pizzas; and the excitement of watching future WNBA star Katie Smith dominate a Columbus Quest championship game. The common thread is the personal touch that Hunter consistently uses to take readers beyond the final scores and the dazzle of lights. These are the people behind the athletes. They’re remembered for how they played, but Hunter reminds us who they were.

“Bob Hunter used his decades of experience on the sports beat to produce columns with depth and perspective. He didn’t just cover seasons, he covered eras. And his entertaining, authoritative writing reflects it.”—Joe Blundo, Columbus Dispatch columnist and author of Does That Make Sense? The Best of Joe Blundo

Bob Hunter was a sportswriter for the Columbus Dispatch for more than forty years, including the last twenty-four as sports columnist. He is the author of nine books, including Thurberville and A Historical Guidebook to Old Columbus. Hunter is a native of Hamilton, Ohio, and a graduate of Ohio University.