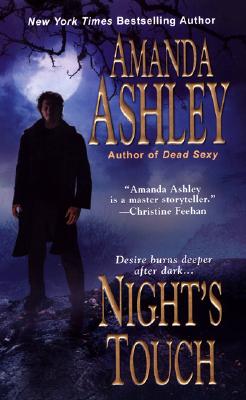 Night's Touch (Children of the Night #2)

Cara DeLongpre wandered into the mysterious Nocturne club looking for a fleeting diversion from her sheltered life. Instead she found a dark, seductive stranger whose touch entices her beyond the safety she's always known and into a heady carnal bliss. . .

A year ago, Vincent Cordova believed that vampires existed only in bad movies and bogeyman stories. That was before a chance encounter left him with unimaginable powers, a hellish thirst, and an aching loneliness he's sure will never end. . .until the night he meets Cara DeLongpre. Cara's beauty and bewitching innocence call to his mind, his heart. . .his blood. For Vincent senses the Dark Gift shared by Cara's parents, and the lurking threat from an ancient and powerful foe. And he knows that the only thing more dangerous than the enemy waiting to seek its vengeance is the secret carried by those Cara trusts the most. . .

Amanda Ashley is one of those rare birds—a California native. She's lived in Southern California her whole life and, except for the earthquakes, she loves it. She shares a home with her husband, as well as an adorable Pomeranian named Lady, a wild house sparrow named Tweety, and a tortoise who remains nameless. Amanda and her alter ego, Madeline, have written 60 books. Not bad for someone who started writing just for the fun of it. Her books have made the New York Times and USA Today bestseller lists. You can learn more about Amanda and her books at AmandaAshley.com.
Loading...
or
Not Currently Available for Direct Purchase