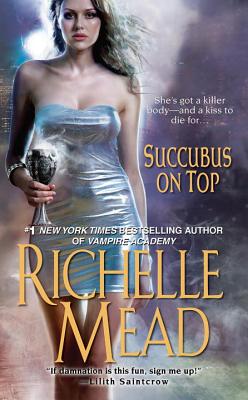 Love hurts, and no one knows it better than Georgina Kincaid. If she so much as kisses Seth Mortensen, the shy, sexy writer she's been dating, she'll drain his life force. Admittedly, the shapeshifting and immortality perks of a succubus are terrific, but it's completely unfair that a she-demon whose purpose is seduction can't get down with the one mortal who accepts her for who she is. . .

It's not just her personal life that's in chaos. Doug, Georgina's co-worker at a local bookstore, has been exhibiting bizarre behavior, and Georgina suspects something far more demonic than double espressos. She could use an assist from Bastien, an irresistibly charming incubus and her best immortal friend, but he's giving Georgina some highly distracting come-hither vibes. Georgina is going to have to work solo on this one-and fast, because soon, Doug's life won't be the only one on the line. . .

"No other succubus will do!" -Vicki Pettersson

"If damnation is this fun, sign me up!" -Lilith Saintcrow

Richelle's books have been on the New York Times and USA Today bestseller lists and received honors from the American Library Association. Her books have been translated into over two dozen languages, as well as transformed into graphic novels. A lifelong reader, Richelle loves mythology and wacky humor. When not writing, she can be found spending time with her family, buying dresses, and watching bad reality TV. More at: www.richellemead.com.
Loading...
or
Not Currently Available for Direct Purchase