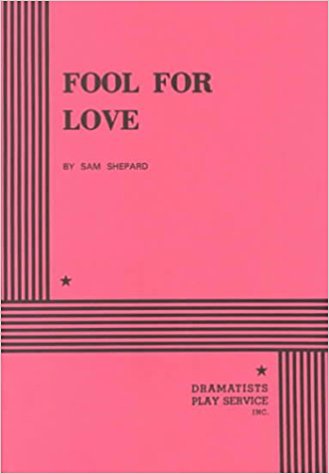 The scene is a stark motel room at the edge of the Mojave Desert. May, a disheveled young woman, sits dejectedly on a rumpled bed while Eddie, a rough-spoken rodeo performer, crouches in a corner fiddling with his riding gear. When he attempts to console May, who is distressed by Eddie's frequent absences and love affairs, she seems, at first, to soften—but then she suddenly attacks him. As the recriminations pour out, and the action becomes at times physically violent, the desperate nature of their relationship becomes apparent—they cannot get along with, or without, one another, yet neither can subdue their burning passion. The poignancy of their situation (they are half-brother and half-sister as well as lovers) is pointed out by the play's two other characters: a hapless young man who stops by to take May to the movies and becomes the butt of Eddie's funniest yet most humiliating jokes, and a ghostly old man (perhaps their father) who sits in a rocking chair at the side of the stage, sipping whiskey and commenting wryly on what he observes. Eventually May and Eddie tire of their struggle and embrace—but it is evident that the respite is temporary and that their love, the curse of the past which haunts them, will remain forever damned and hopeless.

Praise For Fool for Love…

Winner of the Obie Award. A critical and popular success, this masterfully constructed work brings searing intensity and rare theatrical excitement to its probing, yet sharply humorous study of love, hate and the dying myths of the Old West. "…Sam Shepard's purest and most beautiful play." —NY Daily News. "It is as mysterious and unsettling—now you see it, now you don't—as spare and, incidentally, as funny as anything he has ever done." —The New Yorker. "FOOL FOR LOVE is certainly one of the best plays of our time. FOOL FOR LOVE may very well be one of the great plays of the late twentieth century." —BackStage. "…a powerful addition to Shepard's impressive output." —Variety.

Sam Shepard had his first New York plays, COWBOYS and THE ROCK GARDEN, produced by Theatre Genesis in 1963. For several seasons, he worked with Off-Off-Broadway theatre groups including La MaMa and Caffe Cino. Eleven of his plays have won Obie Awards including CHICAGO and ICARUS’S MOTHEr (1965); RED CROSS and LA TURISTA (1966); FORENSIC AND THE NAVIGATORS and MELODRAMA PLAY (1967); THE TOOTH OF CRIME (1972); ACTION (1974); and CURSE OF THE STARVING CLASS (1976). Shepard was awarded a Pulitzer Prize as well as an Obie Award for his play BURIED CHILD (1979). FOOL FOR LOVE (1982) received the Obie for Best Play as well as for Direction. A LIE OF THE MIND (1985) won the New York Drama Critics’ Circle Award in 1986 and the 1986 Outer Critics Circle Award for Outstanding New Play. A revived BURIED CHILD under the direction of Gary Sinise opened on Broadway in April 1996 and was nominated for a Tony Award. KICKING A DEAD HORSE (2007) and AGES OF THE MOON (2009) both received their world premieres at the Abbey Theatre in Dublin. KICKING A DEAD HORSE transferred to The Public Theater in New York and to the Almeida Theatre in London, and AGES OF THE MOON received its US premiere at Atlantic Theater Company in 2010. Shepard’s latest play, HEARTLESS, premiered in 2012 at Signature. Shepard wrote the screenplays for “Zabriskie Point”; Wim Wenders’ “Paris, Texas”; and Robert Altman’s “Fool for Love”, a film version of his play of the same title. As writer/director, he filmed “Far North” and “Silent Tongue” in 1988 and 1992 respectively. As an actor he has appeared in the films “Days of Heaven”, “Resurrection”, “Raggedy Man”, “The Right Stuff”, “Frances”, “Country”, “Fool for Love”, “Crimes of the Heart”, “Baby Boom”, “Steel Magnolias”,” Bright Angel”, “Defenseless”, “Voyager”, “Thunderheart”, “The Pelican Brief”, “Safe Passage”, “Hamlet” and, most recently, “Don’t Come Knocking”, also co-written with Wim Wenders. In 1986, Shepard was inducted into the American Academy of Arts and Letters. In 1992, he received the Gold Medal for Drama from the Academy, and in 1994, he was inducted into the Theater Hall of Fame.
Loading...
or
Not Currently Available for Direct Purchase