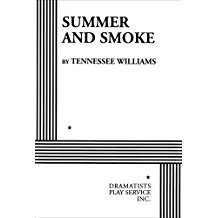 THE STORY: A play that is profoundly affecting, SUMMER AND SMOKE is a simple love story of a somewhat puritanical Southern girl and an unpuritanical young doctor. Each is basically attracted to the other but because of their divergent attitudes toward life, each over the course of years is driven away from the other. Not until the end does the doctor realize that the girl's high idealism is ultimately right, and while she is still in love with him, it turns out that neither time nor circumstances will allow the two to come together. Because of the explicit details provided by the author's production notes, the stage directions, and the diagram of the set design, nonprofessionals should have no difficulty in mounting the play effectively.

One of the author's most highly regarded works.