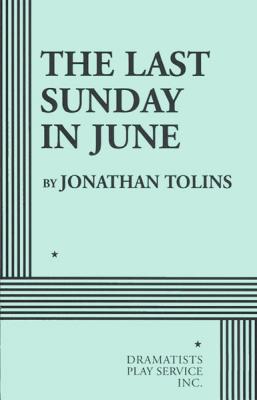 The Last Sunday in June

It is the last Sunday in June, the day of the annual Gay Pride Parade through New York's Greenwich Village. Tom and Michael, his partner of seven years, intend to spend the day planning their impending move from the Big Apple to the upstate town of Nyack, but their plans are rerouted as one friend after another drops by to view the parade from the window of their apartment. An afternoon originally designated for shopping at Pottery Barn instead turns into a series of conversations about relationships, self-acceptance and the very meaning of what it is to be gay, eventually calling into question Tom and Michael's relationship itself.

"A smart timely and very funny play. A mature work full of bold surprises…Mr. Tolins has provided a useful sociological service, a taking of cultural temperature at a moment when it needs to be taken…[he] succeeds smartly at his intention here, which is to express impatience with the staler elements of gay dramatic literature and to push the 'gay play' forward into its next generation of concerns." —NY Times.

"A deftly constructed and cunningly written piece, hovering between a parody of and an homage to the gay play…There's life in the gay comedy yet!" —NY Post.