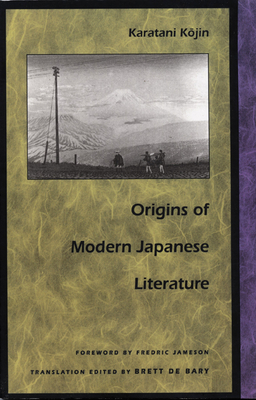 Since its publication in Japan ten years ago, the Origins of Modern Japanese Literature has become a landmark book, playing a pivotal role in defining discussions of modernity in that country. Against a history of relative inattention on the part of Western translators to modern Asian critical theory, this first English publication is sure to have a profound effect on current cultural criticism in the West. It is both the boldest critique of modern Japanese literary history to appear in the post-war era and a major theoretical intervention, which calls into question the idea of modernity that informs Western consciousness.
In a sweeping reinterpretation of nineteenth-and twentieth-century Japanese literature, Karatani Kojin forces a reconsideration of the very assumptions underlying our concepts of modernity. In his analysis, such familiar terms as origin, modern, literature, and the state reveal themselves to be ideological constructs. Karatani weaves many separate strands into an argument that exposes what has been hidden in both Japanese and Western accounts of the development of modern culture. Among these strands are: the "discovery" of landscape in painting and literature and its relation to the inwardness of individual consciousness; the similar "discovery" in Japanese drama of the naked face as another kind of landscape produced by interiority; the challenge to the dominance of Chinese characters in writing; the emergence of confessional literature as an outgrowth of the repression of sexuality and the body; the conversion of the samurai class to Christianity; the mythologizing of tuberculosis, cancer, and illness in general as a producer of meaning; and the "discovery" of "the child" as an independent category of human being.
A work that will be important beyond the confines of literary studies, Karatani's analysis challenges basic Western presumptions of theoretical centrality and originality and disturbs the binary opposition of the "West" to its so-called "other." Origins of Modern Japanese Literature should be read by all those with an interest in the development of cultural concepts and in the interrelating factors that have determined modernity.