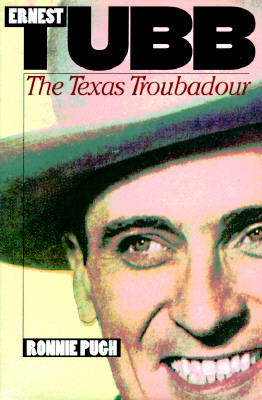 In this definitive biography of Ernest Tubb, Ronnie Pugh brings one of country music's greatest performers back to center stage. Tracing a career that began in the 1930s and continued until just a few years before Tubb's death in 1984, Pugh presents not only the long and legendary life of the Texas Troubadour but also an unparalleled view of the world of country music in which Ernest Tubb played an essential part.
Tubb began his career as an imitator of Jimmie Rodgers, but stormed the country music scene in the 1940s with a new honky tonk sound and a string of hits that included "Walking the Floor Over You." His innovations marked an important transition in country music to a style and lyric in tune with modern American working people, or at least that offered the real-life themes of hard drinking, divorce, tough times, and ruined lives--changes that helped define the music we recognize today as "country." A member of the Grand Ole Opry until 1982, Tubb hosted a live radio broadcast from the Ernest Tubb Record Shop in Nashville for years and became one of the first country music stars to host his own television show in the mid-1960s. Always popular and on the road much of the time even after his prime hit-making years had ended, he was well-known for promoting the careers of many new performers on the rise.
Delving into fan club journals, songbooks, newspaper broadcast logs, record company files, and hundreds of interviews, Ronnie Pugh draws a picture of Tubb--exploring both his personal and professional life--that is unprecedented in its intimacy, detail, and vitality. We get a close-up view of Tubb riding the crest of his popularity, setting the pace for Nashville, facing the onslaught of Elvis Presley and rock 'n roll, and surviving as a country music legend. Richly illustrated with almost a hundred photographs, many of which are rare unpublished shots from private collections, Ernest Tubb also contains a detailed and complete sessionography, a resource that will be of continuing importance for serious record collectors.
A biography that has been long awaited from Ronnie Pugh, unquestionably the leading authority on Ernest Tubb, this book will delight readers from among the fans of country music, those interested in the history of country music or American popular music and culture generally, and, of course, Ernest Tubb fans.

Ronnie Pugh is Head of Reference at the Country Music Foundation, Nashville, Tennessee. He is the author of numerous articles on country music and has written the liner notes for dozens of country music recordings.
Loading...
or
Not Currently Available for Direct Purchase