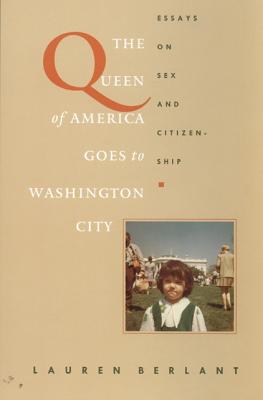 The Queen of America Goes to Washington City

In The Queen of America Goes to Washington City, Lauren Berlant focuses on the need to revitalize public life and political agency in the United States. Delivering a devastating critique of contemporary discourses of American citizenship, she addresses the triumph of the idea of private life over that of public life borne in the right-wing agenda of the Reagan revolution. By beaming light onto the idealized images and narratives about sex and citizenship that now dominate the U.S. public sphere, Berlant argues that the political public sphere has become an intimate public sphere. She asks why the contemporary ideal of citizenship is measured by personal and private acts and values rather than civic acts, and the ideal citizen has become one who, paradoxically, cannot yet act as a citizen--epitomized by the American child and the American fetus.
As Berlant traces the guiding images of U.S. citizenship through the process of privatization, she discusses the ideas of intimacy that have come to define national culture. From the fantasy of the American dream to the lessons of Forrest Gump, Lisa Simpson to Queer Nation, the reactionary culture of imperilled privilege to the testimony of Anita Hill, Berlant charts the landscape of American politics and culture. She examines the consequences of a shrinking and privatized concept of citizenship on increasing class, racial, sexual, and gender animosity and explores the contradictions of a conservative politics that maintains the sacredness of privacy, the virtue of the free market, and the immorality of state overregulation--except when it comes to issues of intimacy.
Drawing on literature, the law, and popular media, The Queen of America Goes to Washington City is a stunning and major statement about the nation and its citizens in an age of mass mediation. As it opens a critical space for new theory of agency, its narratives and gallery of images will challenge readers to rethink what it means to be American and to seek salvation in its promise.

Lauren Berlant is Professor of English at the University of Chicago. She is coeditor of Critical Inquiry and Public Culture and author of The Anatomy of National Fantasy.
Loading...
or support indie stores by buying on