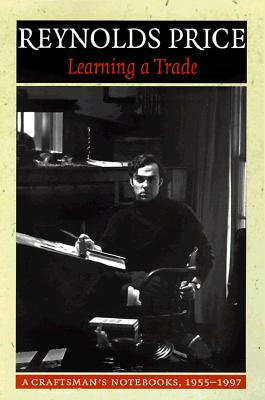 From Reynolds Price, much acclaimed author of award-winning novels, plays, poems, stories, and essays, comes a work that is unique among contemporary writers of American literature. For more than forty years, Price has kept a working journal of his writing life. Now published for the first time, Learning a Trade provides a revealing window into this writer's creative process and craftsman's sensibilities.
Whether Price is reflecting on the rhythm of his day-to-day writing process or ruminating about the central character in what would become, for instance, Kate Vaiden--should she be a woman, what would be her name, why would the story be told in the first person?--he envelops the reader in the task at hand, in the trade being practiced. Instead of personal memoir or a collection of literary fragments, Learning a Trade presents what Price has called the "ongoing minutes" of his effort to learn his craft. Equally enlightening as an overview of a career of developing prominence or as a perspective on the building of individual literary works, this volume not only allows the reader to hear the author's internal dialogue on the hundreds of questions that must be turned and mulled during the planning and writing of a novel but, in an unplanned way, creates its own compelling narrative.
These notebooks begin in "that distant summer in dazed Eisenhower America," a month after Price's graduation from Duke University, and conclude in "the raucous millennial present" with plans for his most recent novel, Roxanna Slade. Revealing the genesis and resolution of such works as The Surface of Earth, The Source of Light, Kate Vaiden, Clear Pictures, and Blue Calhoun, Learning a Trade offers a rich reward to those seeking to enter the guild of writers, as well as those intrigued by the process of the literary life or captured by the work of Reynolds Price.

Reynolds Price is the author of thirty books, including eleven novels and many volumes of poems, plays, stories, and essays. In 1962 his novel A Long and Happy Life received the William Faulkner Award for a first novel. Kate Vaiden won the National Book Critics Circle Award in 1986. His Collected Stories appeared in 1993, followed four years later in 1997 by his Collected Poems. Private Contentment, a play written for television, was commissioned by American Playhouse and appeared in its premier season on PBS; Full Moon, Price's sixth play, was performed by the American Conservatory Theatre in San Francisco in 1994. In 1995 he began to broadcast regular commentaries for "All Things Considered" on National Public Radio. Since 1958 Reynolds Price has taught English at Duke University, where he is James B. Duke Professor of English.
Loading...
or
Not Currently Available for Direct Purchase