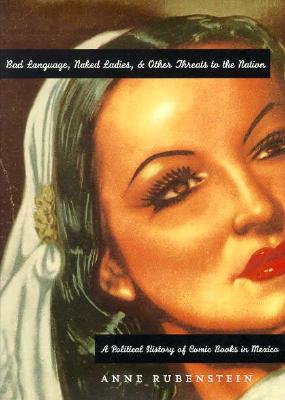 Bad Language, Naked Ladies, and Other Threats to the Nation

A Political History of Comic Books in Mexico

In Bad Language, Naked Ladies, and Other Threats to the Nation, Anne Rubenstein examines how comic books-which were overwhelmingly popular but extremely controversial in post-revolutionary Mexico-played an important role in the development of a stable, legitimate state. Studying the relationship of the Mexican state to its civil society from the 1930s to the 1970s through comic books and their producers, readers, and censors, Rubenstein shows how these thrilling tales of adventure-and the debates over them-reveal much about Mexico's cultural nationalism and government attempts to direct, if not control, social change.
Since their first appearance in 1934, comic books enjoyed wide readership, often serving as a practical guide to life in booming new cities. Conservative protest against the so-called immorality of these publications, of mass media generally, and of Mexican modernity itself, however, led the Mexican government to establish a censorship office that, while having little impact on the content of comic books, succeeded in directing conservative ire away from government policies and toward the Mexican media. Bad Language, Naked Ladies, and Other Threats to the Nation examines the complex dynamics of the politics of censorship occasioned by Mexican comic books, including the conservative political campaigns against them, government and industrial responses to such campaigns, and the publishers' championing of Mexican nationalism and their efforts to preserve their publishing empires through informal influence over government policies. Rubenstein's analysis suggests a new Mexican history after the revolution, one in which negotiation over cultural questions replaced open conflict and mass-media narrative helped ensure political stability.
This book will engage readers with an interest in Mexican history, Latin American studies, cultural studies, and popular culture.

Anne Rubenstein is Assistant Professor of History at York University, Toronto.
Loading...
or support indie stores by buying on