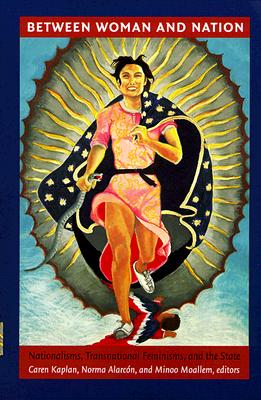 Between Woman and Nation

Nationalisms, Transnational Feminisms, and the State

InBetween Woman and Nation constructions such as nationalism, homeland, country, region, and locality are for the first time examined in the context of gender. The contributors--leading scholars of ethnicity, transnationalism, globalization, and feminist theory--are united in their determination to locate and describe the performative space of interactions between woman and nation. These are interactions, claim the contributors, that cannot be essentialized.
This interdisciplinarily collection investigates women in diverse locales--ranging from Quebec to Beirut. The contributors consider such subjects as Yucatan feminism, Islamic fundamentalisms, Canadian gender formations, historic Chicana/o struggles, and Israeli/Palestinian conflicts. Divided into three parts, the collection first examines constructions of nationalism and communities whose practices complicate these constructions. The second section discusses regulations of particular nation-states and how they affect the lives of women, while the third presents studies of transnational identity formation, in which contributors critique ideas such as "multicultural nationalism" and "global feminism." Arguing provocatively that such movements and concepts inadequately represent women's interests, contributors examine how such beliefs and their attendant organizations may actually bolster the very formations they ought to subvert.
In its demonstration of the critical possibilities of feminist alliances across discrepant and distinct material conditions, Between Woman and Nation will make a unique contribution to women's studies, feminist theory, studies of globalization and transnationalism, ethnic studies, and cultural studies.