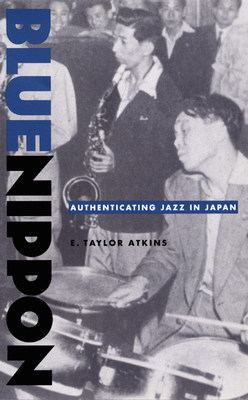 Japan's jazz community--both musicians and audience--has been begrudgingly recognized in the United States for its talent, knowledge, and level of appreciation. Underpinning this tentative admiration, however, has been a tacit agreement that, for cultural reasons, Japanese jazz "can't swing." In Blue Nippon E. Taylor Atkins shows how, strangely, Japan's own attitude toward jazz is founded on this same ambivalence about its authenticity.
Engagingly told through the voices of many musicians, Blue Nippon explores the true and legitimate nature of Japanese jazz. Atkins peers into 1920s dancehalls to examine the Japanese Jazz Age and reveal the origins of urban modernism with its new set of social mores, gender relations, and consumer practices. He shows how the interwar jazz period then became a troubling symbol of Japan's intimacy with the West--but how, even during the Pacific war, the roots of jazz had taken hold too deeply for the "total jazz ban" that some nationalists desired. While the allied occupation was a setback in the search for an indigenous jazz sound, Japanese musicians again sought American validation. Atkins closes out his cultural history with an examination of the contemporary jazz scene that rose up out of Japan's spectacular economic prominence in the 1960s and 1970s but then leveled off by the 1990s, as tensions over authenticity and identity persisted.
With its depiction of jazz as a transforming global phenomenon, Blue Nippon will make enjoyable reading not only for jazz fans worldwide but also for ethnomusicologists, and students of cultural studies, Asian studies, and modernism.

E. Taylor Atkins is Associate Professor of History at Northern Illinois University.
Loading...
or
Not Currently Available for Direct Purchase