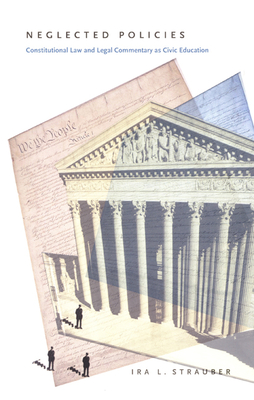 In Neglected Policies, Ira L. Strauber challenges scholars and critics of constitutional jurisprudence to think differently about the Constitution and its interpretation. He argues that important aspects of law, policies, and politics are neglected because legal formalisms, philosophical theories, the reasoning of litigators and judges, and even the role of the courts are too often taken for granted. Strauber advocates an alternative approach to thinking about the legal and moral abstractions ordinarily used in constitutional decision making. His approach, which he calls "agnostic skepticism," interrogates all received jurisprudential notions, abandoning the search for "right answers" to legal questions. It demands that attention be paid to the context-specific, circumstantial social facts relevant to given controversies and requires a habit of mind at home with relativism. Strauber situates agnostic skepticism within contemporary legal thought, explaining how it draws upon sociological jurisprudence, legal realism, and critical legal studies. Through studies of cases involving pornography, adoption custody battles, flag burning, federalism, and environmental politics, he demonstrates how agnostic skepticism applies to constitutional issues. Strauber contends that training in skeptical critique will enable a new kind of civic education and culture--one in which citizens are increasingly tolerant of the ambiguities and contradictions inherent in the law and politics of a pluralistic society.

Using insights from the social sciences to examine the ways constitutional cases are studied and taught, Neglected Policies will interest scholars of jurisprudence, political science, and the sociology of law.