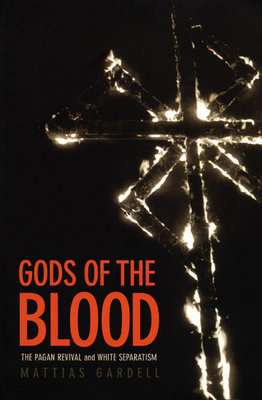 Gods of the Blood

The Pagan Revival and White Separatism

Racist paganism is a thriving but understudied element of the American religious and cultural landscape. Gods of the Blood is the first in-depth survey of the people, ideologies, and practices that make up this fragmented yet increasingly radical and militant milieu. Over a five-year period during the 1990s Mattias Gardell observed and participated in pagan ceremonies and interviewed pagan activists across the United States. His unprecedented entree into this previously obscure realm is the basis for this firsthand account of the proliferating web of organizations and belief systems combining pre-Christian pagan mythologies with Aryan separatism. Gardell outlines the historical development of the different strands of racist paganism-including Wotanism, Odinism and Darkside Asatr -and situates them on the spectrum of pagan belief ranging from Wicca and goddess worship to Satanism.

Gods of the Blood details the trends that have converged to fuel militant paganism in the United States: anti-government sentiments inflamed by such events as Ruby Ridge and Waco, the rise of the white power music industry (including whitenoise, dark ambient, and hatecore), the extraordinary reach of modern communications technologies, and feelings of economic and cultural marginalization in the face of globalization and increasing racial and ethnic diversity of the American population. Gardell elucidates how racist pagan beliefs are formed out of various combinations of conspiracy theories, anti-Semitism, warrior ideology, populism, beliefs in racial separatism, Klandom, skinhead culture, and tenets of national socialism. He shows how these convictions are further animated by an array of thought selectively derived from thinkers including Nietzche, historian Oswald Spengler, Carl Jung, and racist mystics. Scrupulously attentive to the complexities of racist paganism as it is lived and practiced, Gods of the Blood is a fascinating, disturbing, and important portrait of the virulent undercurrents of certain kinds of violence in America today.

Mattias Gardell is Associate Professor in the History of Religions at Stockholm University. He is the author of In the Name of Elijah Muhammad: Louis Farrakhan and The Nation of Islam, published by Duke University Press.
Loading...
or support indie stores by buying on