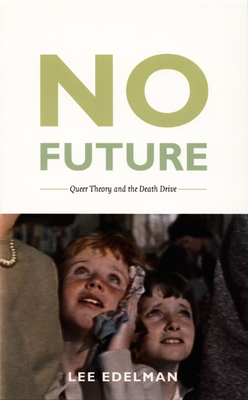 In this searing polemic, Lee Edelman outlines a radically uncompromising new ethics of queer theory. His main target is the all-pervasive figure of the child, which he reads as the linchpin of our universal politics of "reproductive futurism." Edelman argues that the child, understood as innocence in need of protection, represents the possibility of the future against which the queer is positioned as the embodiment of a relentlessly narcissistic, antisocial, and future-negating drive. He boldly insists that the efficacy of queerness lies in its very willingness to embrace this refusal of the social and political order. In No Future, Edelman urges queers to abandon the stance of accommodation and accede to their status as figures for the force of a negativity that he links with irony, jouissance, and, ultimately, the death drive itself.

Closely engaging with literary texts, Edelman makes a compelling case for imagining Scrooge without Tiny Tim and Silas Marner without little Eppie. Looking to Alfred Hitchcock's films, he embraces two of the director's most notorious creations: the sadistic Leonard of North by Northwest, who steps on the hand that holds the couple precariously above the abyss, and the terrifying title figures of The Birds, with their predilection for children. Edelman enlarges the reach of contemporary psychoanalytic theory as he brings it to bear not only on works of literature and film but also on such current political flashpoints as gay marriage and gay parenting. Throwing down the theoretical gauntlet, No Future reimagines queerness with a passion certain to spark an equally impassioned debate among its readers.

Lee Edelman is Professor of English at Tufts University. He is the author of Homographesis: Essays in Gay Literary and Cultural Theory and Transmemberment of Song: Hart Crane's Anatomies of Rhetoric and Desire.
Loading...
or support indie stores by buying on