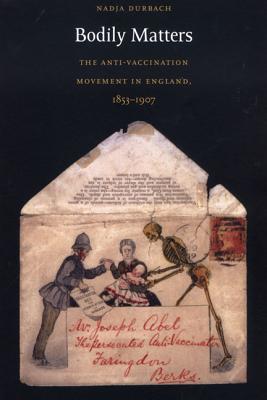 Bodily Matters explores the anti-vaccination movement that emerged in England in the late nineteenth century and early twentieth in response to government-mandated smallpox vaccination. By requiring a painful and sometimes dangerous medical procedure for all infants, the Compulsory Vaccination Act set an important precedent for state regulation of bodies. From its inception in 1853 until its demise in 1907, the compulsory smallpox vaccine was fiercely resisted, largely by members of the working class who interpreted it as an infringement of their rights as citizens and a violation of their children's bodies. Nadja Durbach contends that the anti-vaccination movement is historically significant not only because it was arguably the largest medical resistance campaign ever mounted in Europe but also because it clearly articulated pervasive anxieties regarding the integrity of the body and the role of the modern state.

Analyzing historical documents on both sides of the vaccination debate, Durbach focuses on the key events and rhetorical strategies of the resistance campaign. She shows that those for and against the vaccine had very different ideas about how human bodies worked and how best to safeguard them from disease. Individuals opposed to mandatory vaccination saw their own and their children's bodies not as potentially contagious and thus dangerous to society but rather as highly vulnerable to contamination and violation. Bodily Matters challenges the notion that resistance to vaccination can best be understood, and thus easily dismissed, as the ravings of an unscientific "lunatic fringe." It locates the anti-vaccination movement at the very center of broad public debates in Victorian England over medical developments, the politics of class, the extent of government intervention into the private lives of its citizens, and the values of a liberal society.

Nadja Durbach is Assistant Professor of History at the University of Utah, Salt Lake City.
Loading...
or
Not Currently Available for Direct Purchase