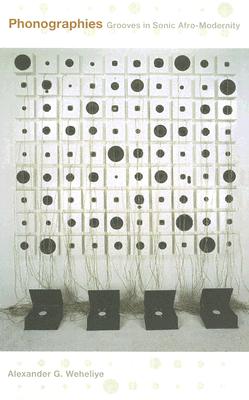 Phonographies explores the numerous links and relays between twentieth-century black cultural production and sound technologies from the phonograph to the Walkman. Highlighting how black authors, filmmakers, and musicians have actively engaged with recorded sound in their work, Alexander G. Weheliye contends that the interplay between sound technologies and black music and speech enabled the emergence of modern black culture, of what he terms "sonic Afro-modernity." He shows that by separating music and speech from their human sources, sound-recording technologies beginning with the phonograph generated new modes of thinking, being, and becoming. Black artists used these new possibilities to revamp key notions of modernity-among these, ideas of subjectivity, temporality, and community. Phonographies is a powerful argument that sound technologies are integral to black culture, which is, in turn, fundamental to Western modernity.

Weheliye surveys literature, film, and music to focus on engagements with recorded sound. He offers substantial new readings of canonical texts by W. E. B. Du Bois and Ralph Ellison, establishing dialogues between these writers and popular music and film ranging from Louis Armstrong's voice to DJ mixing techniques to Darnell Martin's 1994 movie I Like It Like That. Looking at how questions of diasporic belonging are articulated in contemporary black musical practices, Weheliye analyzes three contemporary Afro-diasporic musical acts: the Haitian and African American rap group the Fugees, the Afro- and Italian-German rap collective Advanced Chemistry, and black British artist Tricky and his partner Martina. Phonographies imagines the African diaspora as a virtual sounding space, one that is marked, in the twentieth century and twenty-first, by the circulation of culture via technological reproductions-records and tapes, dubbing and mixing, and more.

Alexander G. Weheliye is Assistant Professor of English and African American Studies at Northwestern University.
Loading...
or support indie stores by buying on