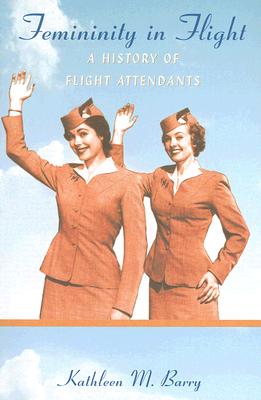 "In her new chic outfit, she looks like anything but a stewardess working. But work she does. Hard, too. And you hardly know it." So read the text of a 1969 newspaper advertisement for Delta Airlines featuring a picture of a brightly smiling blond stewardess striding confidently down the aisle of an airplane cabin to deliver a meal.

From the moment the first stewardesses took flight in 1930, flight attendants became glamorous icons of femininity. For decades, airlines hired only young, attractive, unmarried white women. They marketed passenger service aloft as an essentially feminine exercise in exuding charm, looking fabulous, and providing comfort. The actual work that flight attendants did--ensuring passenger safety, assuaging fears, serving food and drinks, all while conforming to airlines' strict rules about appearance--was supposed to appear effortless; the better that stewardesses performed by airline standards, the more hidden were their skills and labor. Yet today flight attendants are acknowledged safety experts; they have their own unions. Gone are the no-marriage rules, the mandates to retire by thirty-two. In Femininity in Flight, Kathleen M. Barry tells the history of flight attendants, tracing the evolution of their glamorized image as ideal women and their activism as trade unionists and feminists.

Barry argues that largely because their glamour obscured their labor, flight attendants unionized in the late 1940s and 1950s to demand recognition and respect as workers and self-styled professionals. In the 1960s and 1970s, flight attendants were one of the first groups to take advantage of new laws prohibiting sex discrimination. Their challenges to airlines' restrictive employment policies and exploitive marketing practices (involving skimpy uniforms and provocative slogans such as "fly me") made them high-profile critics of the cultural mystification and economic devaluing of "women's work." Barry combines attention to the political economy and technology of the airline industry with perceptive readings of popular culture, newspapers, industry publications, and first-person accounts. In so doing, she provides a potent mix of social and cultural history and a major contribution to the history of women's work and working women's activism.

Kathleen M. Barry has a doctorate in history from New York University. She has taught American history at NYU and the University of Cambridge.
Loading...
or
Not Currently Available for Direct Purchase