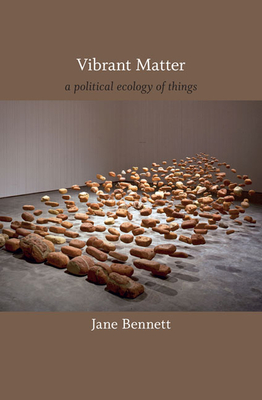 In Vibrant Matter the political theorist Jane Bennett, renowned for her work on nature, ethics, and affect, shifts her focus from the human experience of things to things themselves. Bennett argues that political theory needs to do a better job of recognizing the active participation of nonhuman forces in events. Toward that end, she theorizes a "vital materiality" that runs through and across bodies, both human and nonhuman. Bennett explores how political analyses of public events might change were we to acknowledge that agency always emerges as the effect of ad hoc configurations of human and nonhuman forces. She suggests that recognizing that agency is distributed this way, and is not solely the province of humans, might spur the cultivation of a more responsible, ecologically sound politics: a politics less devoted to blaming and condemning individuals than to discerning the web of forces affecting situations and events.

Bennett examines the political and theoretical implications of vital materialism through extended discussions of commonplace things and physical phenomena including stem cells, fish oils, electricity, metal, and trash. She reflects on the vital power of material formations such as landfills, which generate lively streams of chemicals, and omega-3 fatty acids, which can transform brain chemistry and mood. Along the way, she engages with the concepts and claims of Spinoza, Nietzsche, Thoreau, Darwin, Adorno, and Deleuze, disclosing a long history of thinking about vibrant matter in Western philosophy, including attempts by Kant, Bergson, and the embryologist Hans Driesch to name the "vital force" inherent in material forms. Bennett concludes by sketching the contours of a "green materialist" ecophilosophy.

Jane Bennett is Professor of Political Theory and Chair of the Department of Political Science at Johns Hopkins University. She is the author of The Enchantment of Modern Life: Attachments, Crossings, and Ethics and Thoreau's Nature: Ethics, Politics, and the Wild, and an editor of The Politics of Moralizing and In the Nature of Things: Language, Politics, and the Environment.
Loading...
or support indie stores by buying on