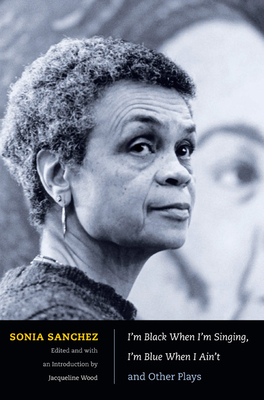 I'm Black When I'm Singing, I'm Blue When I Ain't and Other Plays

Sonia Sanchez is a prolific, award-winning poet and one of the most prominent writers in the Black Arts movement. This collection brings her plays together in one volume for the first time. Like her poetry, Sanchez's plays voice her critique of the racism and sexism that she encountered as a young female writer in the black militant community in the late 1960s and early 1970s, her ongoing concern with the well-being of the black community, and her commitment to social justice. In addition to The Bronx Is Next (1968), Sister Son/ji (1969), Dirty Hearts (1971), Malcolm/Man Don't Live Here No Mo (1972), and Uh, Uh; But How Do It Free Us? (1974), this collection includes the never-before-published dramas I'm Black When I'm Singing, I'm Blue When I Ain't (1982) and 2 X 2 (2009), as well as three essays in which Sanchez reflects on her art and activism. Jacqueline Wood's introduction illuminates Sanchez's stagecraft in relation to her poetry and advocacy for social change, and the feminist dramatic voice in black revolutionary art.

Sonia Sanchez is a poet, playwright, and activist living in Philadelphia. Her many books of poetry include Shake Loose My Skin, Does Your House Have Lions?, Under a Soprano Sky, Homegirls and Handgrenades, We a BaddDDD People, and Homecoming. She is the recipient of numerous honors recognizing her writing and activism, among them a PEN Writers' Award and an American Book Award, as well as the Community Service Award from the National Black Caucus of State Legislators and the Peace and Freedom Award from the Women's International League for Peace and Freedom.Jacqueline Wood is Associate Professor of African American Literature and the Interim Director of the African American Studies Program at the University of Alabama at Birmingham.
Loading...
or
Not Currently Available for Direct Purchase