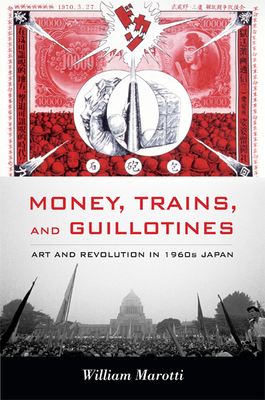 During the 1960s a group of young artists in Japan challenged official forms of politics and daily life through interventionist art practices. William Marotti situates this phenomenon in the historical and political contexts of Japan after the Second World War and the international activism of the 1960s. The Japanese government renewed its Cold War partnership with the United States in 1960, defeating protests against a new security treaty through parliamentary action and the use of riot police. Afterward, the government promoted a depoliticized everyday world of high growth and consumption, creating a sanitized national image to present in the Tokyo Olympics of 1964. Artists were first to challenge this new political mythology. Marotti examines their political art, and the state's aggressive response to it. He reveals the challenge mounted in projects such as Akasegawa Genpei's 1,000-yen prints, a group performance on the busy Yamanote train line, and a plan for a giant guillotine in the Imperial Plaza. Focusing on the annual Yomiuri Ind pendant exhibition, he demonstrates how artists came together in a playful but powerful critical art, triggering judicial and police response. Money, Trains, and Guillotines expands our understanding of the role of art in the international 1960s, and of the dynamics of art and policing in Japan.

William Marotti is Associate Professor of History at the University of California, Los Angeles.
or support indie stores by buying on
Copyright © 2020 American Booksellers Association