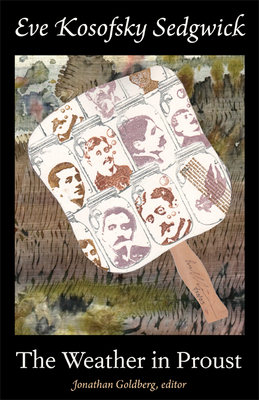 The Weather in Proust (Series Q)

The Weather in Proust gathers pieces written by the eminent critic and theorist Eve Kosofsky Sedgwick in the last decade of her life, as she worked toward a book on Proust. This book takes its title from the first essay, a startlingly original interpretation of Proust. By way of Neoplatonism, Buddhism, and the work of Melanie Klein, Sedgwick establishes the sense of refreshment and surprise that the author of the Recherche affords his readers. Proust also figures in pieces on the poetry of C. P. Cavafy, object relations, affect theory, and Sedgwick's textile art practices. More explicitly connected to her role as a pioneering queer theorist are an exuberant attack against reactionary refusals of the work of Guy Hocquenghem and talks in which she lays out her central ideas about sexuality and her concerns about the direction of US queer theory. Sedgwick lived for more than a dozen years with a diagnosis of terminal cancer; its implications informed her later writing and thinking, as well as her spiritual and artistic practices. In the book's final and most personal essay, she reflects on the realization of her impending death. Featuring thirty-seven color images of her art, The Weather in Proust offers a comprehensive view of Sedgwick's later work, underscoring its diversity and coherence.

Eve Kosofsky Sedgwick (1950-2009) was Distinguished Professor of English at the CUNY Graduate Center. She is the author of Epistemology of the Closet, Between Men, and A Dialogue on Love. Her books Touching Feeling; Tendencies; Fat Art, Thin Art; Novel Gazing; Gary in Your Pocket; and Shame and Its Sisters (co-edited with Adam Frank), are all also published by Duke University Press.Jonathan Goldberg is Arts and Sciences Distinguished Professor of English and Director of the Studies in Sexualities Program at Emory University. He is the author, most recently, of The Seeds of Things.
or support indie stores by buying on
(This book is on backorder)