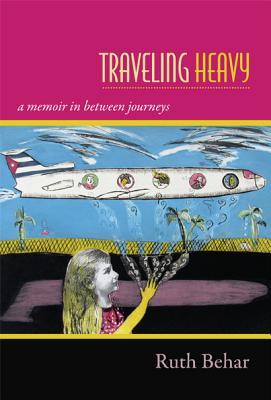 A Memoir in Between Journeys

Traveling Heavy is a deeply moving, unconventional memoir by the master storyteller and cultural anthropologist Ruth Behar. Through evocative stories, she portrays her life as an immigrant child and later, as an adult woman who loves to travel but is terrified of boarding a plane. With an open heart, she writes about her Yiddish-Sephardic-Cuban-American family, as well as the strangers who show her kindness as she makes her way through the world. Compassionate, curious, and unafraid to reveal her failings, Behar embraces the unexpected insights and adventures of travel, whether those be learning that she longed to become a mother after being accused of giving the evil eye to a baby in rural Mexico, or going on a zany pilgrimage to the Behar World Summit in the Spanish town of B jar.

Behar calls herself an anthropologist who specializes in homesickness. Repeatedly returning to her homeland of Cuba, unwilling to utter her last goodbye, she is obsessed by the question of why we leave home to find home. For those of us who travel heavy with our own baggage, Behar is an indispensable guide, full of grace and hope, in the perpetual search for connection that defines our humanity.

Ruth Behar was born in Havana, Cuba. She and her family moved to New York City when she was five. In the years since, she has become an internationally acclaimed writer and the Victor Haim Perera Collegiate Professor of Anthropology at the University of Michigan. She is the author of many books, including An Island Called Home: Returning to Jewish Cuba; The Vulnerable Observer: Anthropology That Breaks Your Heart; and Translated Woman: Crossing the Border with Esperanza's Story, a New York Times Notable Book of the Year. In addition to her work as an anthropologist, Behar is a poet, a fiction writer, and a documentary filmmaker. She wrote, directed, and produced Adio Kerida (Goodbye Dear Love), a film that has been shown at film festivals around the world. Behar has been honored with many prizes, including a MacArthur "Genius" Award.
Loading...
or
Not Currently Available for Direct Purchase