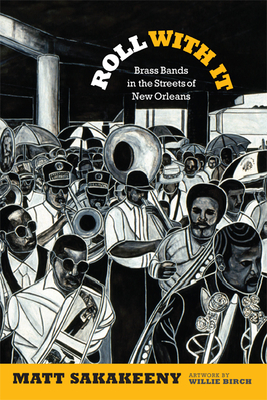 Roll With It is a firsthand account of the precarious lives of musicians in the Rebirth, Soul Rebels, and Hot 8 brass bands of New Orleans. These young men are celebrated as cultural icons for upholding the proud traditions of the jazz funeral and the second line parade, yet they remain subject to the perils of poverty, racial marginalization, and urban violence that characterize life for many black Americans. Some achieve a degree of social mobility while many more encounter aggressive policing, exploitative economies, and a political infrastructure that creates insecurities in healthcare, housing, education, and criminal justice. The gripping narrative moves with the band members from back street to backstage, before and after Hurricane Katrina, always in step with the tap of the snare drum, the thud of the bass drum, and the boom of the tuba.

Matt Sakakeeny is an ethnomusicologist and journalist, New Orleans resident and musician. An Assistant Professor of Music at Tulane University, he initially moved to New Orleans to work as a co-producer of the public radio program American Routes. Sakakeeny has written for publications including The Oxford American, Mojo, and Wax Poetics. He plays guitar in the band Los Po-Boy-Citos. Willie Birch is an international artist who lives in New Orleans, where he was born in 1942. Birch received his BA from Southern University New Orleans in 1969 and his MFA from the Maryland Institute College of Art (MICA) in 1973. He is the recipient of many awards and honors, including the State of Louisiana Governor's award and fellowships from the National Endowment for the Arts and the Guggenheim Foundation. His works are part of the permanent collections of the New Orleans Museum of Art, the Metropolitan Museum of Art, the Museum of Modern Art, and the Whitney Museum of American Art.
Loading...
or support indie stores by buying on