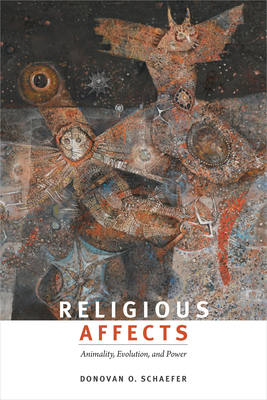 In Religious Affects Donovan O. Schaefer challenges the notion that religion is inextricably linked to language and belief, proposing instead that it is primarily driven by affects. Drawing on affect theory, evolutionary biology, and poststructuralist theory, Schaefer builds on the recent materialist shift in religious studies to relocate religious practices in the affective realm-an insight that helps us better understand how religion is lived in conjunction with systems of power. To demonstrate religion's animality and how it works affectively, Schaefer turns to a series of case studies, including the documentary Jesus Camp and contemporary American Islamophobia. Placing affect theory in conversation with post-Darwinian evolutionary theory, Schaefer explores the extent to which nonhuman animals have the capacity to practice religion, linking human forms of religion and power through a new analysis of the chimpanzee waterfall dance as observed by Jane Goodall. In this compelling case for the use of affect theory in religious studies, Schaefer provides a new model for mapping relations between religion, politics, species, globalization, secularism, race, and ethics.

Donovan O. Schaefer is Departmental Lecturer in Science and Religion at the University of Oxford.
Loading...
or support indie stores by buying on