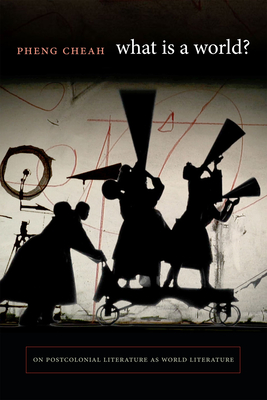 What Is a World? (Paperback)

In What Is a World? Pheng Cheah, a leading theorist of cosmopolitanism, offers the first critical consideration of world literature's cosmopolitan vocation. Addressing the failure of recent theories of world literature to inquire about the meaning of world, Cheah articulates a normative theory of literature's world-making power by creatively synthesizing four philosophical accounts of the world as a temporal process: idealism, Marxist materialism, phenomenology, and deconstruction. Literature opens worlds, he provocatively suggests, because it is a force of receptivity. Cheah compellingly argues for postcolonial literature's exemplarity as world literature through readings of narrative fiction by Michelle Cliff, Amitav Ghosh, Nuruddin Farah, Ninotchka Rosca, and Timothy Mo that show how these texts open up new possibilities for remaking the world by negotiating with the inhuman force that gives time and deploying alternative temporalities to resist capitalist globalization.

Pheng Cheah is Professor of Rhetoric and Chair of the Center for Southeast Asia Studies at the University of California, Berkeley. He is the author of Inhuman Conditions: On Cosmopolitanism and Human Rights and Spectral Nationality: Passages of Freedom from Kant to Postcolonial Literatures of Liberation.
or support indie stores by buying on
Copyright © 2020 American Booksellers Association