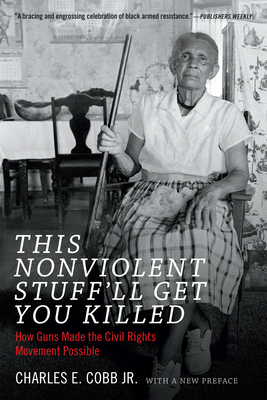 This Nonviolent Stuff'll Get You Killed (Paperback)

How Guns Made the Civil Rights Movement Possible

Visiting Martin Luther King Jr. during the Montgomery, Alabama, bus boycott, journalist William Worthy almost sat on a loaded pistol. "Just for self-defense," King assured him. It was not the only weapon King kept for such a purpose; one of his advisors remembered the reverend's Montgomery, Alabama, home as "an arsenal." Like King, many ostensibly "nonviolent" civil rights activists embraced their constitutional right to self-protection--yet this crucial dimension of the Afro-American freedom struggle has been long ignored by history. In This Nonviolent Stuff'll Get You Killed, Charles E. Cobb Jr. recovers this history, describing the vital role that armed self-defense has played in the survival and liberation of black communities. Drawing on his experiences in the civil rights movement and giving voice to its participants, Cobb lays bare the paradoxical relationship between the nonviolent civil rights struggle and the long history and importance of African Americans taking up arms to defend themselves against white supremacist violence.

Charles E. Cobb Jr. is a former field secretary for the Student Nonviolent Coordinating Committee and has taught at Brown University. An award-winning journalist, he is an inductee of the National Association of Black Journalists Hall of Fame. Cobb lives in Jacksonville, Florida.
or
Buy Here
Copyright © 2020 American Booksellers Association