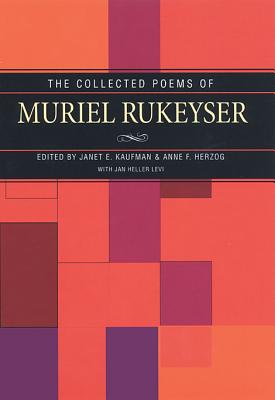 Muriel Rukeyser held a visionary belief in the human capacity to create social change through language. She earned an international reputation as a powerful voice against enforced silences of all kind, against the violence of war, poverty, and racism. Her eloquent poetry of witness-of the Scottsboro Nine, the Spanish Civil War, the poisoning of the Gauley Bridge laborers-split the darkness covering a shameful world.

In addition to the complete texts of her twelve previously published books, this volume also features new poems discovered by the editors; Rukeyser's translations, including the first English translations of Octavio Paz's work; early work by Rukeyser not previously published in book form; and the controversial book-length poem Wake Island. An introduction by the editors traces Rukeyser's life and literary reputation and complements discerning annotations and textual notes to the poems.

Janet E. Kaufman is assistant professor of English at the University of Utah.

Anne F. Herzog is Dean of theSchool of Arts, Science, and Professional Studies at Springfield College. They are coeditors of "How Shall We Tell Each Other of the Poet?": The Life and Writing of Muriel Rukeyser.

Jan Heller Levi, is the author of a collection of poems, Once I Gazed at You in Wonder, and editor of A Muriel Rukeyser Reader. She is working on a biography of Muriel Rukeyser.

“Rukeyser appears more and more as an exemplary American modernist, the lyric poet of epic awareness. Her Collected Poems is a monument of the last century, a gift to the present and a hope for the future. In it one finds . . . poems of such variety, passion and compassion, indignant judgment, joy, humor and conviction that it is impossible to summarize.”
--The Washington Post

"The breadth , innovation, variety and daring  of Muriel Rukeyser’s work has always defied efforts to confine her.  She was, in fact, one of the major American imaginations  of "the first century of world wars. "     Now at last comes  this scholarly, yet  beautifully accessible edition of her lifework in poetry--a great  gift to the 21st century."

"An event to loudly celebrate—a new collected poems of Muriel Rukeyser, who opened much of the forbidden territory where poets can now move with ease. Here, for a new generation, the full range of the capacious poet who gave twentieth-century women’s poetry its mottos and its most audacious exemplar, and poetry of witness and moral passion its most ardent and urgent American voice."

"Now, as ever, we need these poems that speak to ethical issues and social justice, individual and international concerns. An impressive contribution to Rukeyser scholarship, this edition includes translations and secures for the poet an important place in American letters."

"One of the most important poets of our time. . . . Her originality, her genius, her courage illuminate our century."