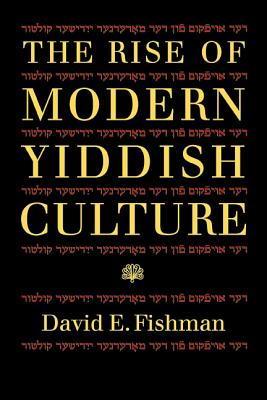 The Rise of Modern Yiddish Culture explores the transformation of Yiddish from a low-status vernacular to the medium of a complex modern culture.  David Fishman examines the efforts of east European Jews to establish their linguistic distinctiveness as part of their struggle for national survival in the diaspora.  Fishman considers the roots of modern Yiddish culture in social and political conditions in Imperial Tsarist and inter-war Poland, and its relationship to Zionism and Bundism. In so doing, Fishman argues that Yiddish culture enveloped all socioeconomic classes, not just the proletarian base, and considers the emergence, at the turn of the century, of a pro-Yiddish intelligentsia and a Yiddishist movement.

As Fishman points out, the rise of Yiddishism was not without controversy. Some believed that the rise of Yiddish represented a shift away from a religious-dominated culture to a completely secular, European one; a Jewish nation held together by language, rather than by land or religious content. Others hoped that Yiddish culture would inherit the moral and national values of the Jewish religious tradition, and that to achieve this result, the Bible and Midrash would need to exist in modern Yiddish translation. Modern Yiddish culture developed in the midst of these opposing concepts.

Fishman follows the rise of the culture to its apex, the founding of the Yiddish Scientific Institute (YIVO) in Vilna in 1925, and concludes with the dramatic story of the individual efforts that preserved the books and papers of YIVO during the destruction and annihilation of World War II and in postwar Soviet Lithuania.  The Rise of Modern Yiddish Culture, like those efforts, preserves the cultural heritage of east European Jews with thorough research and fresh insights.

”An illuminating work of serious scholarship that provides a fresh look at the growth of Yiddish culture in the late nineteenth and early twentieth centuries.”
Matthew Hoffman, Shofar: An Interdisciplinary Journal of Jewish Studies, Winter 2007

“At last, a scholar has given us a comprehensive and fresh treatment of east European Yiddishism as a political and social movement. Fishman challenges the stereotype of Yiddishism as a secularist, socialist rebellion against Jewish tradition and deftly places the movement in the larger context of Russian, Polish, and Jewish politics. Written in a spare, accessible style, this book portrays one of the most important movements in modern Jewish history as it ranges from the mid-nineteenth century to the eve of World War Two.”
—Zvi Gitelman, University of Michigan

“Warmly recommended not only to students of East European Jewish history and culture but to all those interested in the ways in which language intersects with nationalism. In these matters Fishman is a most knowledgeable and reliable guide.”
—Jews in Russia and Eastern Europe

David E. Fishman is professor of Jewish history at the Jewish Theological Seminary of America in New York.  He is the author of Russia’s First Modern Jews and editor of From Mesopotamia to Modernity: Ten Introductions to Jewish History and Literature.
Loading...
or
Not Currently Available for Direct Purchase