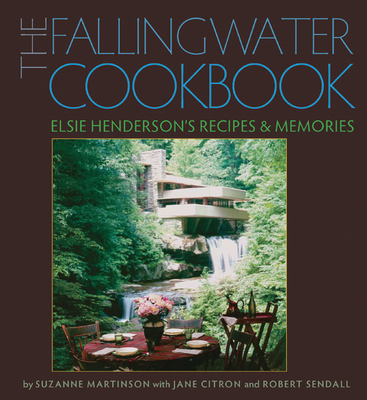 Hailed as the most architecturally significant private residence in the United States, Fallingwater was a welcome retreat for Edgar J. Kaufmann, his wife Liliane, their son, Edgar jr., and their many guests. The Fallingwater Cookbook captures the experience of fine and casual dining at this famed home. Suzanne Martinson, former food editor and writer for the Pittsburgh Press and the Pittsburgh Post-Gazette, relates recipes from Elsie Henderson, the longtime and last cook for the Kaufmann family at Fallingwater, along with Henderson's memories and anecdotes of life in the renowned house on the waterfall. Henderson's encounters with the Kaufmanns, John Heinz, Senator Ted Kennedy, and Frank Lloyd Wright, among others, are recounted with humor, affection, and surprising detail.
The book is rounded out with additional recipes from chef Robert Sendall, who began producing special events at Fallingwater in the early 1990s, Jane Citron, with whom Sendall taught cooking classes, and Mary Ann Moreau, former chef of the Fallingwater Café. Artfully composed photographs of food, architecture, landscape, family, and guests complete the collection, which, like Fallingwater, will be treasured for years to come.

Suzanne Martinson is a former food editor and writer for the Pittsburgh Press and Pittsburgh Post-Gazette. She is a two-time winner of both the James Beard and Bert Greene Awards for food journalism.

Praise For The Fallingwater Cookbook: Elsie Henderson's Recipes and Memories…

“Many people cook to entertain, but this book will entertain while you cook. Longtime and last Fallingwater cook Elsie Henderson fills the pages with delectable recipes and lively anecdotes.”
—Western Pennsylvania History

“The exterior of Wright's architectural wonder, Fallingwater, is recognized throughout the world, but less is known about the interior life of this famous house. Now, through the wonderful recipes of Elsie Henderson, we come to know something about the tastes and hospitality of the people who lived there. In this enlightening book, food communicates the nature of the cook as well as the family and guests who were privileged to dine within this extraordinary place.”
--Barbara Haber, author, From Hardtack to Homefries: An Uncommon History of American Cooks and Meals

“The heart of every home is in its kitchen, and Elsie Henderson kept the heart of this architectural masterpiece beating. Suzanne Martinson recounts the delicious story behind the early years at Fallingwater.”
--Kim O'Donnel, author, A Mighty Appetite for the Holidays
or
Buy Here
Copyright © 2020 American Booksellers Association