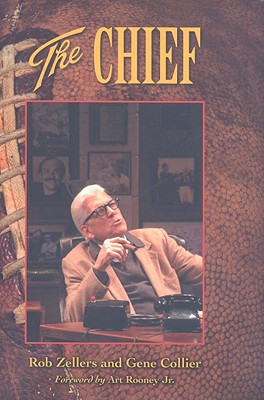 Based on the journal writings of Art Rooney Jr., with input from other family members, colleagues, and friends, The Chief is a one-man play that faithfully reenacts the larger-than-life persona of Pittsburgh icon Art Rooney, owner of one of the most successful football franchises of all time. Playwrights Gene Collier and Rob Zellers recreate the words, deeds, and essence of this paragon of Pittsburgh sports as he reminisces, in his gruff but affable style, about his tough upbringing on Pittsburgh's North Side and the family, friends, politicians, and outlandish adventures that shaped his life. He also recounts the colorful history of the Pittsburgh Steelers, from the foibles and frustrations of the early days to the great Super Bowl runs of the 1970s, and offers insights on the characters of many of his beloved players. Reproduced in print for the first time, the work is complemented by photographs of Rooney, his family, and members of the Steelers, along with scenes from the standout performance of actor Tom Atkins, who has embodied the role since the play's inception.

Praise For The Chief…

“I know what the audience sees is Art Rooney and his world as it really existed, and I know because I was there.”
—Art Rooney Jr., from the foreword

“The Chief is absolutely wonderful. The dialogue is phenomenal. I've seen it twice and I'd see it again. They should write a sequel! Every Steelers fan and every Pittsburgher should see it and know the great history of this organization.”
—Tunch Ilkin, former Steelers offensive lineman and current Steelers radio analyst

“In The Chief, Zellers and Collier have succeeded in turning Steelers' owner Art Rooney from legend to man and then back to legend again-and in so doing, they have captured what made him and his hometown so great-authenticity, toughness, heart, and humor. Rooney and Pittsburgh become inseparable, as both underdogs and champions. The Chief makes you believe-in Art Rooney, the Steelers, Pittsburgh, and this country.”
—Carl Kurlander, University of Pittsburgh, Visiting Distinguished Senior Lecturer; screenwriter (St. Elmo's Fire, My Tale of Two Cities)

Rob Zellers has been the education director at Pittsburgh Public Theater for twenty years. He has created numerous programs and worked with thousands of students in acting, technical theater, and playwriting, bringing the artists of the Public Theater together with the community. Gene Collier is an award-winning columnist for the Pittsburgh Post-Gazette. He has written about sports, politics, and social issues at newspapers in Pittsburgh and Philadelphia for the past twenty-eight years.
Loading...
or
Not Currently Available for Direct Purchase