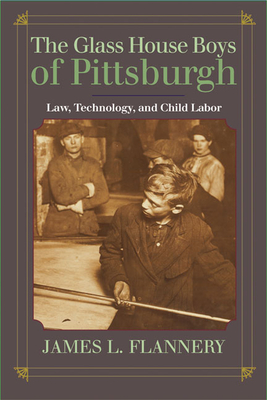 At the end of the nineteenth century, Pittsburgh was leading the nation in glass production, and glass bottle plants in particular relied heavily on adolescent (and younger) males for their manufacturing process. These “glass house boys” worked both day and night, as plants ran around the clock to meet production demands and remain price competitive with their newly-automated rivals. Boys performed menial tasks, received low wages, and had little to say on their own behalf.

By the turn of the century, most states had enacted laws banning children from working at night, and coupled with compulsory education requirements, had greatly reduced the use of children in industry. In western Pennsylvania, however, child labor was deeply entrenched, and Pennsylvania lawmakers lagged far behind the rest of the nation. In The Glass House Boys of Pittsburgh, James L. Flannery presents an original and compelling examination of legislative clashes over the singular issue of the glass house boys. He reveals the many societal, economic, and political factors at work that allowed for the perpetuation of child labor in this industry and region.

Through extensive research in Pennsylvania state legislature archives, National Child Labor Committee reports, and union and industry journals, Flannery uncovers a complex web of collusion between union representatives, industrialists, and legislators that kept child labor reform at bay. Despite national pressure, a concerted effort by reformers, and changes to education laws, the slow defeat of the “glass house exception” in 1915 came about primarily because of technological advances in the glass bottle industry that limited the need for child labor.

James L. Flannery is associate professor of legal writing at the University of Pittsburgh School of Law. He is an editor of Pittsburgh Tax Review.

Praise For The Glass House Boys of Pittsburgh…

“Though the bulk of this book serves mostly as a legal history, it beautifully weaves together the interralted stories of all opposing parties--the glass-house boys and their families, the Progressive Era social reformers, the glass manufacturers, the adult glass workers and their union, and the state legislature--presenting each impartially, showing each side’s vital, and often competing, interests in this particular child-labor issue.”
—Pittsburgh Magazine

“Succeeds at re-creating the world of children who earned meager wages by assisting men in the production of bottles. Simply fleshing out their experiences would be a triumph. Fortunately, ‘The Glass House Boys of Pittsburgh’ has bigger ambitions, as it considers definitions of childhood, the physical and political contours of work, and the logic and practice of reform.”
—Journal of American History

“The Glass House Boys of Pittsburgh is an elegantly crafted and gripping narrative.  James Flannery uses his impressive talents as a historian, writer, and legal scholar to recreate a lost world, when America was an industrial titan and children's wages ensured the survival of many working-class families. And he shows how politicians and factory owners, union workers and parents, could effectively undermine the best-laid plans of America's leading child labor reformers.”

“A fascinating account of the struggle to stamp out dangerous child labor in the glass bottle industry's last holdouts in western Pennsylvania. Engaging and eye-opening in its own right, Flannery's narrative has clear resonance for the fight to eliminate today's shameful exception to U.S. child labor laws that allows children to work in agriculture at younger ages, for longer hours, and under more hazardous conditions than children in any other job.”
—Zama Coursen-Neff, Deputy Director, Children's Rights Division, Human Rights Watch

“Admirably explodes the myth that the advent of automated glass blowing machinery ended the industry’s use of child labor. Flannery correctly points out that while the new automated factories could afford to reduce or even eliminate dependence on children, their hand competitors were forced to take the opposite strategy and intensify the use of children to make up for their competitive disadvantages. Thus, a labor-saving technology had the perverse effect of actually increasing the exploitation of children.”

—The Journal of the Gilded Age and Progressive Era