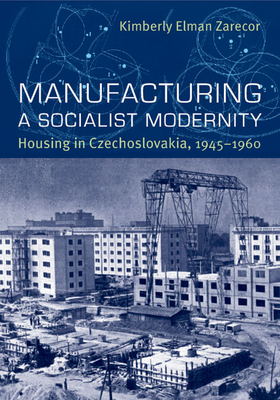 Eastern European prefabricated housing blocks are often vilified as the visible manifestations of everything that was wrong with state socialism. For many inside and outside the region, the uniformity of these buildings became symbols of the dullness and drudgery of everyday life. Manufacturing a Socialist Modernity complicates this common perception. Analyzing the cultural, intellectual, and professional debates surrounding the construction of mass housing in early postwar Czechoslovakia, Zarecor shows that these housing blocks served an essential function in the planned economy and reflected an interwar aesthetic, derived from constructivism and functionalism, that carried forward into the 1950s.
With a focus on prefabricated and standardized housing built from 1945 to 1960, Zarecor offers broad and innovative insights into the country’s transition from capitalism to state socialism. She demonstrates that during this shift, architects and engineers consistently strove to meet the needs of Czechs and Slovaks despite challenging economic conditions, a lack of material resources, and manufacturing and technological limitations. In the process, architects were asked to put aside their individual creative aspirations and transform themselves into technicians and industrial producers.
Manufacturing a Socialist Modernity is the first comprehensive history of architectural practice and the emergence of prefabricated housing in the Eastern Bloc. Through discussions of individual architects and projects, as well as building typologies, professional associations, and institutional organization, it opens a rare window into the cultural and economic life of Eastern Europe during the early postwar period.

"Zarecor offers broad and innovative insights into the country’s transition from capitalism to state socialism. . . . Through discussions of individual architects and projects, as well as building typologies, professional associations, and institutional organization, it open a rare window into the cultural and economic life of Eastern Europe during the early postwar period.”
—Eurotexture

“From postwar modernist model housing developments in Kladno, Most, and Ostrava to the first panelák at Gottwaldov, Manufacturing a Socialist Modernity explains in vivid detail and lucid prose how architecture and politics worked together—for better or for worse—to define Czechoslovakia's urban landscape in the Communist era.”
—Lewis H. Siegelbaum, Michigan State University

“After World War II, all Czech architectural offices and building firms merged into a unified state apparatus, extending earlier experiments by Europe’s most advanced architectural functionalists. This endeavor would later clash with the discourse of socialist realism imposed under the Soviets. Zarecor masterfully reconstructs the intense conflicts among architects caught between modern technology and nostalgic aesthetics as reflected in their designs and theoretical discourse.”
—Jean-Louis Cohen, New York University

“A good step toward understanding the complex history of the built environment under state socialism and bridges the ‘schism’ that historians commonly allude to between interwar and postwar histories  . . . definitely a worthwhile read for both architectural and social historians and anyone interested in the representation of culture and the tension between art and technology.”
—REGION: Regional Studies of Russia, Eastern Europe, and Central Asia

“A fascinating book . . . well researched . . . quite beautifully and masterfully laid out.”

“Groundbreaking . . . Zarecor successfully describes the mechanism of architectural practice under the communist regime in Czechoslovakia between 1948 and 1961, convincingly rejects the notion that this practice was completely under political pressure and identifies a line of continuity with earlier efforts by the admired and politically ‘innocent’ inter-war generation of architects.”

“By the end of this book, a reader unfamiliar with Czechoslovak architectural history will never look at a panelak—the much maligned prefab apartment bloc of the socialist period—the same way again. . . . Zarecor brings to the book the eye of a trained architect, but also an ear for the politics of the time, and this is as much a study of policy-making and factional struggle as it is of design. On those grounds alone it should be read by anyone with an interest in Stalinism in Central Europe.”

”Richly illustrated . . . [a] well-researched, significant book.”
—A Journal of History and Civilisation in East Central Europe