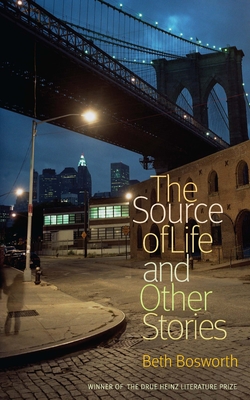 From “The Eight Rhetorical Mode”
Later he asked, “Would you like to go for a hike sometime?” and two trains of thought left the station: He means to get to know me and we might leave the city together and it’s been a long time since I climbed a mountain. That train chugged into a wider brighter country all the time. The other train went by another route through the panicked interior. He’s a lunatic, it whistled. He’s been in and out of hospitals. He will take you to a mountaintop and throw you right off into the bright air: choo choo!

Post-divorce dating is one more cause for celebration (or a quick call in to the police) in Beth Bosworth’s revelatory new book, The Source of Life and Other Stories. The spine of this collection is a series of linked stories about Ruth Stein, a Brooklyn author whose first book has exposed her father’s abuses; while the voice here, speaking across a lifetime, ranges from bittersweet to humorous to lethal. In other stories Bosworth’s narrators—a mother left to care for her son’s suicidal dog, an editor haunted by a dog-eared manuscript—seem to grab hold of the reins and run off with their fates. Meanwhile Bosworth explores the extended family, the bonds of friendship, an apocalyptic Vermont, the rank yet redeemable Gowanus Canal; also rites of passage, race relations, divorce, middle-aged romance, dementia, funerals, alcoholism, and the Jewish religion. Reality is just another stumbling block for Bosworth’s characters, who might help themselves but don’t always choose to. There are leaps of faith here, nonetheless, as the collection dispenses a kind of narrative psychotropic for survival and redemption, with a chaser of humor mixed in.

“Beth Bosworth has a voice capable of a great performative range: comic, rueful, alert to implication, sophisticated. The overall vision encompassed in The Source of Life and Other Stories is aware of all the ills and grievances and worse that being human entails, but its spirit is nonetheless tolerant, at key moments redemptive. When I turned the last page I had the sensation I used to have in movie theaters as a kid when the credits rolled and the lights went on: that I had been somewhere that had felt very real, and that I wasn't quite ready to go back outside.”
—Sven Birkerts


“Beth Bosworth has an exuberant and assured voice and a flair for humor. Her collection is a wry look at contemporary life, with a particular focus on that messy, often ridiculous phenomenon, the family. This is a beautiful group of stories, driven by a clear and complex understanding of family relationships and an irrepressible mirth.”
—Tina May Hall, author of The Physics of Imaginary Objects, winner of the 2010 Drue Heinz Literature Prize

“I think I can hear the shade of Grace Paley humming her contentment at Beth Bosworth's latest collection of stories, with their lovely riffs and a dazzling gallery of ordinary extraordinary characters. With a gift for the telling detail everywhere apparent, she can describe a dog's nails clicking on wooden steps, or its tongue ‘lapping at the source of life.’ Which is exactly what her own imagination is doing in every one of these wonderfully animated stories.”

"Beth Bosworth sets her stories in the labyrinth of family life, bravely exploring its dark turns and heart-stopping entanglements. The minds of her characters are self haunted with their memories, and what is imagined as the past is as crucially immediate as the present. A Burden of Earth is the debut of a gifted writer—someone to watch."
— E.L. Doctorow, praise for A Burden of Earth and Other Stories

“A collection of concise, unapologetic and inventive stories that pack a fast and tough punch . . . Beneath the narrator’s cerebral self-analysis, Bosworth crafts a context illustrating  the character’s more profound and indeterminate loneliness. This  ability is the genius of the collection.”

“A dizzingly beautiful treatise on what it means to love, live, and get lost in time. . . . Bosworth possesses the ability to take the world as we may know it and show it to us through new eyes. . . . [The stories] always have one thing in common: the struggle to understand and connect with each other. This theme is illustrated in lucid and beautiful language across the collection, and by the end one is left with the certain feeling of time well spent in Bosworth’s world.”

”Bosworth has talent to spare. . . . There are moments of unusual clarity, insight, and actual humor to reward the reader on nearly ever page of the collection. . . . Descriptive gymnastics [are] on display, many of which are subtle and quick and mysterious, well worth luxuriating over.”

Beth Bosworth has taught at the New School for Social Research, CUNY’s NYC Technical College, and for many years at Saint Ann’s School in Brooklyn, where she is also founding editor of the Saint Ann's Review. Her publications include a novel, Tunneling, and a collection of short stories, A Burden of Earth. Her stories have appeared in the Kenyon Review, the Seneca Review, Forward, IMAGE, Hanging Loose, Guernica, and elsewhere.
Loading...
or
Not Currently Available for Direct Purchase